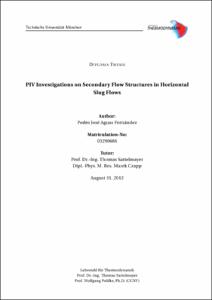 Liquid and gas phases circulate horizontally through the same channel in many industrial processes. They can do it following different patterns of so-called two-phase flow. Depending on the superficial velocity of each one of the phases, the flow can vary. The different types of flows observed in horizontal pipes are bubbly flow, stratified flow,wavy flow, slug flowand annular flow. The first formal classification of flow patterns was carried out by Taitel and Dukler during the 1970s [TNA78]. Slug flow is a phenomenon that has gained importance during the last decades in different technology fields. The two best-known areas where its analysis is of great importance are nuclear power plants and oil and gas extraction and distribution. In nuclear power plants that operate with boiling water (mainly PWR and BWR), vapor and liquid water circulate chaotically mixed till they arrive to an elbow or a U-tube where centrifugal forces lead to the separation of gas and liquid. From there, if the superficial velocities of the two phases belong to slug flow, whose water hammers could damage or eventually break the pipe, an undesired effect called LOCA (Loss Of Coolant Accident) could take place. Regarding oil and gas extraction and distribution, it is important to consider that from natural oilfields any extraction of hydrocarbons will consist on a mixture of components with different volatility; therefore, it will usually consist on liquids and gases flowing together, sometimes in slug flow and consequently provoking pressure peaks throughout the pipelines, which means lower pumping efficiency and potential damage for the distribution materials. The study of slug onset is especially interesting because if it were avoided or controlled by artificial means, all the dangers described in the paragraph above would automatically disappear. Rafi Ahmed and Sanjoy Banerjee developed a theoretical method to predict the onset of slugs based on instabilities in the amplitude of waves in 1985, the so-called Kelvin-Helmholtz instabilities [AB85]. This slug onset mechanism was accepted by most authors, but its wavelength dependence contradicted the experimental data. Therefore, a theoretical model using the concept of energy balance and taking into account the shear stresses was developed by Chun and Lee in 1996 [CL96]. Hurlburt and Hanratty investigated the transition from slug to plug flow, which differs from slug in its lack of air within the liquid body, using slug stability in 2001 [HH02] and so helping to define the boundary conditions of slug flow. Regarding measurement techniques for the analysis of slugs, 2D PIV (Particle Image Velocimetry) started being used in the late 1970s and is the most common technique nowadays since it allows highlighting the right number of particles for the study of the flow dynamics. It consists on the introduction in the fluid of tracer particles that can be identified due to their luminescence when a laser plane intersects the flow. In addition, a recording system consisting of one or more cameras with a high shooting frequency provides accurate sequences of pictures that can be processed by suitable software to determine velocity fields based on the path followed by the tracer particles.Another technique based on the same principle and used in the investigations of flow dynamics is Stereo PIV. In this case, two cameras are needed and the target of the laser is a plane perpendicular set to the axis of the tube. Although in this way more information about the secondary flows can be determined, this method requires a very accurate and difficult calibration of the recording system and at least two cameras with a perfect synchronization in time. Besides, the processing of the images obtained with Stereo PIV needs to be treated and correlated through a more time-demanding process than 2D PIV. Though Stereo PIV has been used in the analysis of pipe flow since 2003 with the work of Van Doornel [vDHLÅ03], it has been applied for the first time in the Chair of Thermodynamics of the Technische Universität München for the investigation of two-phase flow [CUS11]. The scope of this work is the further investigation of slug onset and its description including secondary effects such as turbulences, a characteristic that has never been illustrated about slug flow. For this purpose, images obtained with 2D PIV and Stereo PIV will be used. To enhance the quality of the results, the first task will be the development of suitable software to avoid false velocity vectors produced by reflection and refraction, to overlap several pairs of images obtained by different cameras simultaneously and to treat the data gained after PIV computerized analysis. Moreover, a new kind of graphical representations that reveal a deep insight in the velocity fields of slug flow will be shown.
SubjectsTwo-phase flow -- Computer simulation, Pipelines -- Fluid dynamics, Fluix bifàsic -- Simulació per ordinador, Canonades -- Dinàmica de fluids
ProvenanceAquest document conté originàriament altre material i/o programari no inclòs en aquest lloc web
URIhttp://hdl.handle.net/2099.1/17089