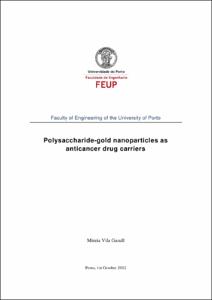 Show full item record
Vila Gasull, Mireia
Tutor / directorCoelho, Manuel
Document typeMaster thesis (pre-Bologna period)
Rights accessOpen Access
Abstract
Recent advances in nanotechnology have offered a wealth of new opportunities for the design of new therapy of cancer creating new drug delivery systems. It has been possible to produce nanoparticles, in particular polysaccharide-based ones, to allow the site-specific delivery of drugs and to improve the pharmacokinetic profile of numerous compounds. Throughout this work, the system of chitosan (CS)-based nanocarriers produced by coacervation with gum arabic (GA) is presented. The main experiments were focused on the encapsulation of bortezomib (BTZ) and Gold nanoparticles (GoldNP) in the CS/GA system. Completing this work, chemopreventive agents were encapsulated in the same system; catechins (EGCG) and vitamin D; accompanied by Gold nanoparticles too. All the different produced nanoparticles produced were within the size range of 200-400 nm, presenting a low polydispersity index, a positive zeta potential and a spherical shape. The different formulations attained a medium bortezomib encapsulation efficiency of 61%, a EGCG of 40%, a vitamin D of 83% and a Gold nanoparticles encapsulation efficiency of nearly 100%. The encapsulation efficiency was increased for bortezomib, EGCG and vitamin D when the particles were coated with polysorbate 80 which acted as a stabilizing agent. Studies of release for bortezomib and Gold nanoparticles system were carried in water and PBS, showing a biphasic pattern with an initial burst, attributed to the entrapped and surface adsorbed drug, followed by slower release. In water, not all release from nanoparticles was appreciated after long time, besides in PBS it was noted that the nanoparticles were biodegradable. In addition, bortezomib-loaded nanoparticles were tested by in vitro cytotoxic studies. The cytotoxic effect was studied in cancer pancreatic cell line compared to normal pancreatic cell line. They have shown how less concentration of encapsulated bortezomib was needed to have the same effect as free bortezomib in cancer cells. Furthermore, encapsulated bortezomib just inhibited the cell growth as opposed to death of cells produced by free bortezomib, at higher concentrations. According to the results, it is possible to conclude that bortezomib and GoldNP CS/GA nanoparticles is a future alternative to replace the treatment with bortezomib of tumors. Continuing the work with encapsulated EGCG and vitamin D showed also promising results.
SubjectsAntineoplastic agents, Gold -- Therapeutic use, Nanoparticles -- Therapeutic use, Polysaccharides, Medicaments antineoplàstics, Or -- Ús terapèutic, Nanopartícules -- Ús terapèutic, Polisacàrids
DegreeENGINYERIA QUÍMICA (Pla 2000)
URIhttp://hdl.handle.net/2099.1/17032
Collections
Share: