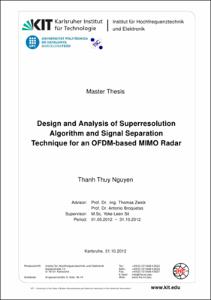 ; Sit, Yoke Leen
Document typeMaster thesis
Rights accessOpen Access
Abstract
Recently, the concept of MIMO radar has been proposed. MIMO radar has the capability to transmit orthogonal (or incoherent) waveforms at multiple transmit antennas. It offers promising potentials for multipath fading, resolution enhancement and interference suppression. Many research about MIMO radar in signal processing have been conducted. However, the implementation of MIMO radar in practice is still not common. In this thesis, the SISO OFDM radar and communication system (RadCom), a previous project at Institut für Hochfrequenztechnik und Elektronik, KIT, Germany, is extended to MIMO configuration using the idea of spectrally interleaved multi-carrier signals to estimate the direction of arrival of targets in 2D and 3D radar. The main aim of this thesis is to implement and evaluate a MIMO OFDM-based radar system. The thesis consits of two parts, the software and hardware part. In the first part of the thesis, the MIMO radar is studied. A signal modeling is derived along with the analysis of suitable antenna geometries for 2D and 3D radar. The MIMO radar with the ability to form vitual array can increase significantly the resolution of direcion-of-arrival (DOA). For that purpose, numerous algorithms based on different mathematical approaches exist. The numerical results show that the MUSIC algorithm based on subspace method is simple to implement and have good resolution. We combine the OFDM-based signal model with MUSIC to perform 2D and 3D radar sensing. The DOA estimation with MUSIC along with the simulation results are presented. The second half of this thesis focuses on hardware design for MIMO radar systems. A RF front end for 4 transmitters with direct conversion architecture was considered. The transmitters include low pass filters (LPFs), I/Q upcoverter, PLL synthesizer, 4:1 Wilkinson divider. Inverse Chebyshev LPFs at 50 Mhz with lumped elements were built and measured. In addition, a sufficient 4:1 Wilkinson divider was simulated and fabricated. The other individual elements of the transmitter was measured and analyzed. Several measurement have been taken to test one whole transmitter. In addition, the signal generated by the FPGA, which is planned to intergrate with the transmitters, are analyzed. Finally, the possible future works have been pointed out.
Description
Extend the OFDM-based SISO radar to MIMO configuration to estimate direction of arrival (azimuth and elevation); Design a RF front end for MIMO radar transmitter and verify the DOA algorithm.
SubjectsRadar, MIMO systems, Radar, Sistemes MIMO
URIhttp://hdl.handle.net/2099.1/17022
Collections
Share: