Effects of forced distribution rating systems on workforce productivity and potential in companies with internal promotion: A Monte-Carlo simulation 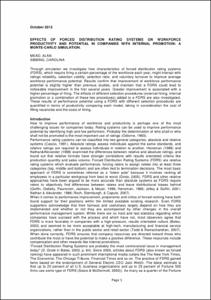 How to improve performance of workforce and productivity is perhaps one of the most challenging issues for companies today. Rating systems can be used to improve performance potential by identifying high and low performers. Probably the determination of who shall or who shall not be promoted is the most important use of ratings (Odiorne, 1963). Performance rating systems can be classified into two general categories: absolute and relative systems (Cascio, 1991). Absolute ratings assess individuals against the same standards, and relative ratings are required to assess individuals in relation to another. Heneman (1986) and Nathan&Alexander (1988) examined the differences between relative and absolute ratings, and found out that relative formats have stronger correlations with results orientated criteria like production quantity and sales volume. Forced Distribution Rating Systems (FDRS) are relative rating systems which evaluate performance, forcing raters to assign ratees into at least three categories (top, middle and bottom) and are often tied to termination decisions. The most basic approach of FDRS is sometimes referred as a “totem pole” because it involves ranking all employees in a particular workgroup from best to worst (Grote, 2005). FDRS and other relative approaches have been argued to be more accurate than absolute systems as FDRS require raters to objectively find differences between ratees and leave distributional biases behind (Goffin, Gellatly, Paunonen, Jackson, & Meyer, 1996; Heneman, 1986; Jelley & Goffin, 2001; Nathan & Alexander, 1988; Roch, Sternburgh, & Caputo, 2007). When it comes to performance improvement, proponents and critics of forced ranking have both found support for their positions within the limited available existing research. Even FDRS supporters acknowledge that their fairness and usefulness largely depend on how they are implemented and whether or not they are accompanied by other changes in the overall performance management system. While there are no hard and fast statistics regarding which companies have succeed with the process and which have not, most observers agree that FDRS is more favorably in companies with a high-pressure, results orientated culture (Bates, 2003) and seemed to be more acceptable at high-tech, manufacturing and financial service organizations, rather than in the public sector and retail sector (Todd & Ramachandran, 2007). When done correctly, FDRS ensures that company resources are directed toward those who contribute the most or have the potential to make a positive difference. These resources include compensation and other rewards like internal promotions. “Forced Distribution Rating Systems are probably the most controversial issue in management today" (D. Grote in Bates, 2003, p. 64). Since 2000, articles about FDRS (also known as forced ranking) have appeared in such prominent international media outlets like The New York Times, The Economist, The Chicago Tribune, Financial Times and so on. The practice of FDRS gained fame based on the endorsement of General Electric CEO Jack Welch. The latest estimate is that up to 20 percent of all U.S. business organizations and up to 25 percent of Fortune 500 firms use some type of FDRS (Sears & McDermott, 2003)). As many as a quarter of the Fortune Page 2 500 companies, including Cisco Systems, Hewlett-Packard, Microsoft, Lucent, Conoco, EDS, and Intel, may be currently using some type of performance management system built around that principle (Melsler, 2003). Nevertheless given the intense interest in FDRS, it is surprising that there is virtually no published research that can inform practitioners about their effectiveness. A prominent study on the field of FDRS was conducted by Scullen, Bergey and Aiman-Smith (2005). Scullen et al. demonstrated for the first time the efficacy of FDRS by means of a simulation obtaining performance potential in a scope of 30 years. The present study sought to extend Scullen’s study attending the limitations they highlighted in their discussion. Our study comprehends the following improvements: a) inclusion of a non-zero correlation between turnover and potential b) firing the lowest performers of the company (instead of firing the poorest performers of each workgroup) and c) evaluation of productivity by adding the costs per hire and the costs of replacement. Furthermore to emulate the reality of modern companies we decided to define a multilevel structure (executives, managers and workers) and we also considered the effects of using internal promotion or not.
SubjectsIndustrial productivity, Manpower planning, Methods engineering, Productivitat industrial, Mà d'obra -- Planificació, Organització del treball
URIhttp://hdl.handle.net/2099.1/16910