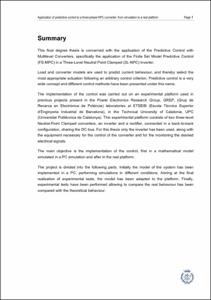 Document typeMaster thesis (pre-Bologna period)
Rights accessOpen Access
Abstract
This final degree thesis is concerned with the application of the Predictive Control with Multilevel Converters, specifically the application of the Finite Set Model Predictive Control (FS-MPC) in a Three-Level Neutral Point Clamped (3L-NPC) Inverter. Load and converter models are used to predict current behaviour, and thereby select the most appropriate actuation following an arbitrary control criterion. Predictive control is a very wide concept and different control methods have been presented under this name. The implementation of the control was carried out on an experimental platform used in previous projects present in the Power Electronics Research Group, GREP, (Grup de Recerca en Electrònica de Potència) laboratories at ETSEIB (Escola Tècnica Superior d’Enginyeria Industrial de Barcelona), in the Technical University of Catalonia, UPC (Universitat Politècnica de Catalunya). This experimental platform consists of two three-level Neutral-Point Clamped converters, an inverter and a rectifier, connected in a back-to-back configuration, sharing the DC-bus. For this thesis only the inverter has been used, along with the equipment necessary for the control of the converter and for the monitoring the desired electrical signals. The main objective is the implementation of the control, first in a mathematical model simulated in a PC simulation and after in the real platform. The project is divided into the following parts. Initially the model of the system has been implemented in a PC, performing simulations in different conditions. Aiming at the final realization of experimental tests, the model has been adapted to the platform. Finally, experimental tests have been performed allowing to compare the real behaviour has been compared with the theoretical behaviour.
SubjectsPredictive control, Control predictiu
URIhttp://hdl.handle.net/2099.1/16596
Collections
Share: