The sanitation ladder: main challenges in monitoring access to sanitation 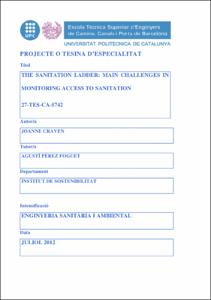 Sanitation (the separation of human beings from our excreta) is an often-neglected aspect of public health which brings substantial health and socioeconomic benefits. In last decade, sanitation has begun to receive more attention, especially due to its inclusion as a target in the UN Millennium Development Goals in 2002 and as a human right in itself in the UN Declaration of Human Rights in 2010. Currently, progress towards the Millennium Development Goal target is measured by a sanitation “ladder”, which classifies sanitation provision by hardware type and separates “improved” technologies (considered adequate) from “unimproved” technologies (considered inadequate), providing an estimate of the percentage of the population with access to adequate sanitation. All latrines shared among different households are considered inadequate. However, there is compelling evidence that other aspects of sanitation (especially hand-washing, and the amount of excreta in the environment) are equally if not more important in bringing health benefits and no reliable method of measuring these has yet been found. In addition, it is questioned whether the current method provides sufficient detail to make policy decisions at local level. This study reviews the literature to present the main challenges currently experienced in monitoring sanitation in rural development contexts and explore possible ways forward. These methods are then tested using data from a set of detailed household interviews carried out in rural Kenya to identify the most important sanitation indicators. This analysis suggests that the current hardware-based indicator predicted latrine conditions well, but that to capture more detail a question could be added regarding whether the latrine hole has a cover in place, and whether faeces is observed in the latrine. It is also suggested that shared latrines be distinguished from public latrines, by recording the location of the latrine. The presence of soap or ash for hand-washing was found to be a good proxy indicator of good hygiene, though it is suggested this be amplified by questions on hand-washing frequency and children’s faeces disposal. To measure the amount of excreta in the environment, three community-level indices were proposed: percentage using an improved latrine, percentage in excreta-free conditions and percentage not defecating openly.
SubjectsSanitary engineering, Sanitation, Enginyeria sanitària, Sanejament
URIhttp://hdl.handle.net/2099.1/16527