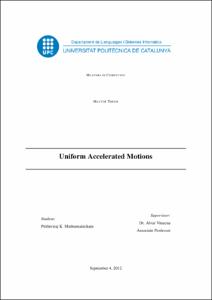 Document typeMaster thesis
Rights accessOpen Access
Abstract
An Affine matrix which maps an initial and final pose can be computed by solving a system of linear equations. Then there exists an interesting problem of finding a time varying affinity which maps the given set of poses and if it exists is always unique and should hold some interesting properites such as affine-invariant, reversible, preserve rigidity, similarities and volume. The Steady Affine Motions and Morphs (SAM) introduced by Jarek Rossignac and Alvar Vinacua solved this problem of time varying affinity and defines the quality of such affinity by the term steadiness. Until SAM, no mathematical definition of steadiness was available and intuitively SAM defined a steady animation to be continuous, to vary dimensions and angles monotonically and rather uniformly, and to move points along pleasing arcs that are free of unnecessary kinks or loops. The authors defined the term ”Steady” as a constant velocity motion in the local moving frame. SAM creates pleasing in-betweening motions that interpolates between an initial and final pose, B and C and the derived equation of beauty was At B with A = C B·-1. SAM is affine-invariant, reversible, preserves isometries (i.e., rigidity), similarities and volume. Previously proposed approaches came up with a solution for the time varying affinity problem, but there was no proper definition of how beautiful or how good the motion was. With the advent of SAM, the beauty of a motion can now be measured by the unsteadiness and Steady Affine motions and morphs is the one solution which comes to have a value of zero for the unsteadiness term. Uniform Accelerated Motions (UAM) carries forward the above definition of steadiness into a constant acceleration motion in the local moving frame. The time varying affinity At is computed using closed form expressions and some of its interesting properties are studied. The constant acceleration motion (in local frame) in UAM is then compared with the constant velocity motion (in local frame) of SAM and the resuls are discussed.
SubjectsComputer graphics, Motion, Space, Infografia, Moviment, Espai
DegreeMÀSTER UNIVERSITARI EN COMPUTACIÓ (Pla 2006)
URIhttp://hdl.handle.net/2099.1/16507
Collections
Share: