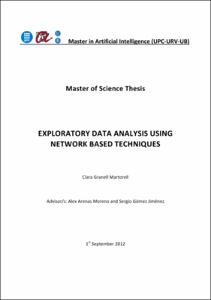 Show full item record
Granell Martorell, Clara
Tutor / director / evaluatorArenas Moreno, Alex; Gómez Jiménez, Sergio
Document typeMaster thesis
Rights accessOpen Access
Description
The aim of this document is to present the work done during the development of my master thesis. The work belongs to the field of complex networks, more concretely to the detection of communities in complex networks. Chapter 1 will be an introduction of the basic concepts and motivations of this work, mainly clarifying the fields of exploratory data analysis, data clustering and complex networks. As all the work is about the finding of communities in complex networks, Chapter 2 is devoted to explain the concepts of mesoscopic structure of networks and its importance in the analysis of real networks, along with the explanations of some of the most well-known techniques to perform this analysis. All the progress done during the master thesis relies on a method for detecting communities developed in the past years by the research group I belong to. This method is known as the AFG algorithm, named after the three authors Arenas, Fernández and Gómez, and it is explained in section 2.5.2 with special emphasis. The work that I have developed is composed of two separate problems: the first one consists in designing an application to make possible the use of the AFG community detection method to perform data clustering over real world multidimensional datasets, which is explained in Chapter 3. The second work consists in improving the AFG method to make possible the detection of communities even when the difference of sizes of the communities make their detection impossible for other community detection algorithms, which can be found in Chapter 4. Chapter 5 contains the conclusions and the future lines of research derived from the present work, and in the Appendix there is a list of publications that sustain the contents presented in this document.
SubjectsMathematical statistics, Data--Classification, Estadística matemàtica, Dades--Classificació
URIhttp://hdl.handle.net/2099.1/16438
Collections
Share: