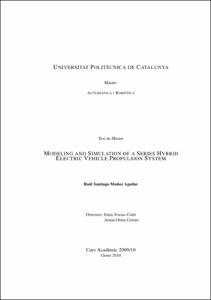 Except where otherwise noted, content on this work is licensed under a Creative Commons license : Attribution-NonCommercial-NoDerivs 3.0 Spain
Abstract
Two problems related with hybrid electric vehicles have been analyzed in this dissertation. The first one consists in proposing a propulsion system scheme for the vehicle and the second one consist in modeling it. In order to set a propulsion system scheme, the standard configurations for the hybrid electric vehicles are presented as well as some variations of the series topologies. Then, a novel configuration which is composed by a synchronous machine and an induction machine is also presented. As said before, the second problem consist in modeling this novel configuration. The reduced model of each machine of the dynamical model is described using the dqtransformation. Bond Graph and Port-Controlled Hamiltonian approaches are also used to describe the WRSM, the DFIM and the whole system models. Finally, the analysis of the power flowing through the system and the regenerative braking possibilities are done.
SubjectsHybrid electric vehicles, Propulsion systems – Computer simulation, Vehicles elèctrics híbrids, Sistemes de propulsió -- Simulació per ordinador
URIhttp://hdl.handle.net/2099.1/16297
Collections
Share: