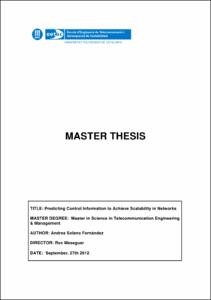 Document typeMaster thesis
Rights accessOpen Access
Abstract
This project is focused on the validation and evaluation of a predictor designed for a wireless routing protocol named Optimized Link State Routing or OLSR, which is a proactive routing protocol, based on link-state algorithms and specifically designed for Mobile Ad Hoc Networks or MANETs. The aim of this predictor is to avoid the flooding of control messages when they are duplicated, i.e. redundant, since they are sent periodically although containing always the same information. Then, using this predictor, it is possible to reduce, to a greater or lesser extent, the overall traffic of the network, which can be traduced in an whole network improvement by reducing the energy and CPU consumption, decreasing the network congestion, and then, reducing loss rate. First of all, in order to analyze the impact of the predictor, it has been done an in-depth study the original OLSR protocol, specially focused on the generation and processing of the topology control messages or TC, which are the responsible of flooding the network topology. Then, tools as Bonnmotion 2.0 and Network Simulator 2 have been used to generate different wireless mobile scenarios and simulate it, respectively. By means of the analysis of the resulting trace files, using AWK software, it has been characterized the OLSR behavior under the different proposed scenarios. Once known the OLSR functioning, it has been explained, validated and evaluated the impact of the introduction of the predictor (OLSRp). It has been defined the more appropriate scenarios for which the introduction of the predictor has a bigger positive impact, i.e. where more TC messages are redundant and its transmission throughout the network can be avoided. Finally, in order to know the environmental impact in terms of energy consumption reduction, it has been analyzed the energy saving achieved thanks to the predictor. Once again, the most appropriate scenarios in which the predictor impact produces the higher saving of energy have been characterized and exemplified in realistic scenarios where use it to take the most advantage of the predictor.
SubjectsAd hoc networks (Computer networks), Mobile communication systems, Xarxes d'àrea local (Xarxes d'ordinadors), Comunicacions mòbils, Sistemes de
URIhttp://hdl.handle.net/2099.1/16155
Collections
Share: