Evaluation of UAS Separation Maneuvers and their Automated Execution 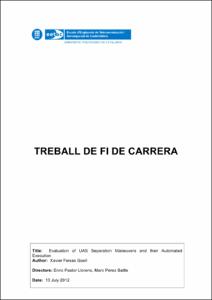 Document typeBachelor thesis
Rights accessOpen Access
Abstract
This project is focussed on the evaluation of the separation maneuvers done by the Unmanned Aerial Systems. For this evaluation the behaviour of variables such as speed of the UAS, heading changes done by the UAS and the different times to conflict are analysed. The evolution of the separation distance with these variables will be plotted. The project will focus on the oblique maneuver, for the forward case and the backward case. The maneuver is described and the ranges of angles that will define it are computed. This angles determine if the maneuver can be considered oblique or not, which means that if the conflict geometry is over the maximum or below the minimum angle the maneuver will not be considered as oblique. Finally an interpolation is done in order to determine which speeds, change of heading and time to conflict are necessary in order to execute the maneuver. Then the dependence with the minimum distance of every variable is explained. All these analysis are done using Matlab where different functions are used to compute all the distances, and this way its evolution with the other variables can be described.
SubjectsDrone aircraft--Control systems, Avions no tripulats
URIhttp://hdl.handle.net/2099.1/15979
Collections
Share: