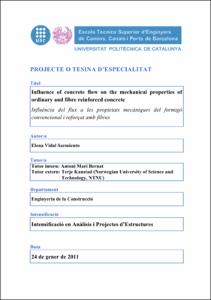 ; Kanstad, Terje
Document typeMinor thesis
Rights accessOpen Access
Abstract
Self compacting concrete is often defined as a composite that possesses not only a very high workability, which results in a not necessary compaction, but also that resists segregation and maintains stable composition throughout transport and placing. However, two of the inner properties of SCC, fluidity and stability, seem, in a primary analysis, to be opposed. That research has tried to investigate how these two properties interact. More particularly, what is the influence of the flow of concrete on its stability. However, this potential instability caused by flow could transcend further than the fresh state, affecting also the hardened properties. An initial experimental part had the aim to study the loss of uniformity caused by flow by means of the segregation experiment. Three mixes were studied, representing each mix one of the three groups: a self compacting concrete, a self compacting concrete with the aggregate grading modified for a potential higher segregation and, finally, a steel fibre reinforced self compacting concrete (SFRSCC). Almost identical results were assessed for the three mixes: the coarse aggregate distribution was constant along the length of the mould. In the case of the SFRSCC, also the fibre volume fraction exhibited a uniform distribution. Therefore, no segregation was observed for the three mixes studied, neither when the mix flowed into a 1,2 m long mould, nor when a longer mould of 2,96 m was used. The second part dealt with the distribution and orientation of fibres within SFRSCC elements. A uniform distribution of fibres is of crucial interest to guaranty the uniform response of the element and the absence of weaker sections that could cause structural problems. The results showed that no differences of the fibre orientation and distribution along the beam were caused by flow. Only a general tendency to distribute more fibres on the bottom part and to align in a planar orientation was observed. The final experimental part studied the potential influence of flow on the mechanical properties, more particularly, on the residual flexural strength of SFRSCC elements. The tested specimen, consisting of a 2,96 m long beam casted from one end, was sawn into three parts, so that three specimens composed of concrete with potentially different flow effects according to its proximity to the casting point were obtained. The mechanical properties of these specimens were studied through bending tests. After testing the thirds, the lack of differences on the flexural tensile strength between the third closer and the third further to the casting point proved that no influence of the flow of concrete was found in that mechanical property. The consideration of all the results obtained during the experimental research points in the direction that concrete had the enough stability during flow to exhibit uniform mechanical properties in the hardened state, unaffected by flow.
Subjectsresidual flexural tensile strength, self compacting concrete, fresh concrete, fresh concrete, Formigó amb fibres
URIhttp://hdl.handle.net/2099.1/15567
Collections
Share: