Design of a retractable, electric propulsion system for sailplanes 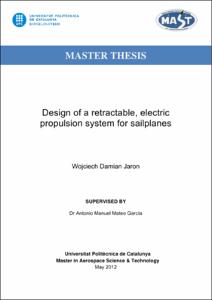 The aim of this thesis was the design of a retractable, electric propulsion system for sailplanes, which could eliminate the main drawbacks of internal combustion engines. The design process was based on a number of modern sailplanes, within the 12 - 15 meter class, with sustainer operation in mind. One of the goals was to create a universal propulsion system that could be fitted to various aircrafts. The first part of the project concerned the selection of the key components of an electric propulsion system. First, the required power and thrust were calculated, and based on the obtained results a suitable electric motor was chosen. For this motor, an electronic controller was selected. Later, the estimation of propeller parameters was performed. Finally, battery basics were discussed and a battery was selected. The second part of the project concerned CAD modeling of the retractable electric propulsion system. The used materials were discussed in the beginning. The design process focused on two main assemblies: the propeller folding mechanism and the retractable structure. The complete result, the individual sub-assemblies and the most important solutions were presented. The use of composite materials was an important point of this thesis. Performance analysis was done after the system had been designed. The retractable electric propulsion system was designed with optimum results. A fullscale CAD model was created. The designed propulsion system can be considered as universal due to its relatively low weight, adequate power and compact size in the retracted position. Custom-made accessories facilitate mounting. A visit to the glider manufacturer Allstar PZL was the source of information about possible mounting solutions and battery placement options. The designed propulsion system can be used as a sustainer for all designated sailplanes. Self-launching proved possible in case of the lightest sailplanes. With similar power and flight duration, the electric propulsion system should be able to compete with petrol powered sustainer systems within the same class.
SubjectsGliders (Aeronatics), Propulsion systems, Planadors (Aeronàutica)
URIhttp://hdl.handle.net/2099.1/15411