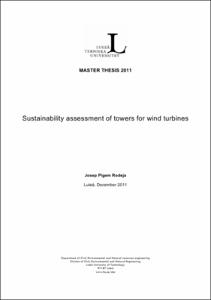 Show full item record
Pigem Rodeja, Josep
Tutor / directorVeljkovic, Milan
Document typeMaster thesis (pre-Bologna period)
Rights accessOpen Access
All rights reserved. This work is protected by the corresponding intellectual and industrial property rights. Without prejudice to any existing legal exemptions, reproduction, distribution, public communication or transformation of this work are prohibited without permission of the copyright holder
Abstract
The increasing world energy demand during last few decades has led wind power installed capacity to a significant growth. Wind power is a renewable resource, which means using it will not deplete the earth's supply of fossil fuels. It is also a clean energy source, and operation does not produce carbon dioxide or any other type of air pollution, as do conventional fossil fuel power sources. However, there is an environmental impact associated dominantly during the production and dismantling. During manufacture of the wind turbine, steel, concrete and other materials will have to be made and transported using energy-intensive processes, generally using fossil energy sources. Several studies demonstrate that among the different parts conforming a wind plant, tower+foundation are the most energy intensive components. A sustainability assessment of a “virtual” tower for wind turbines, 100m hub height with a assumed 3.6 MW capacity wind turbine is made focusing on the embodied CO2 equivalent emissions and energy consumed in production and execution of the towers. A comparison between the two most common types of tower is done: tubular steel tower and prestressed concrete tower. Data on generation of electrical energy from the wind power is evaluated for various countries and simple assessment is made to get estimation of the equivalent CO2 per MW·h of produced electricity. Load tables are commonly provided by the turbine producers when a specific tower design is made. However, a single horizontal force at the hub height is used as an approximation of an equivalent characteristic load for ultimate limit state. Fatigue damage is assessed in the same way decreasing the considered load by a reasonable factor.
SubjectsWind turbines -- Design and construction -- Computer simulation, Wind turbines -- Environmental aspects, Concrete construction, Building, Iron and steel, Aerogeneradors -- Disseny i construcció -- Simulació per ordinador, Aerogeneradors -- Aspectes ambientals, Construccions de formigó, Construccions metàl·liques
ProvenanceAquest document conté originàriament altre material i/o programari no inclòs en aquest lloc web
DegreeENGINYERIA INDUSTRIAL (Pla 1994)
URIhttp://hdl.handle.net/2099.1/15108
Collections
Share: