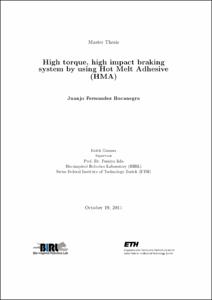 Show full item record
Fernandez Bocanegra, Juan José
Tutor / directorIida, Fumiya
Document typeMaster thesis (pre-Bologna period)
Rights accessOpen Access
Abstract
When designing a new legged robot it is important to think about what the robot has to do. It is not the same a non-stop walking robot than a legged robot which has to be at the same position much longer than moving. For the second kind of robot, it could be a great improvement to add a break in each actuated joint, so it is not necesary to wasted energy during the stoped time. And not only that, thanks to the brake, it is possible to achive heavier loads using a speci c walking pattern in which you always place the center of mass on the three legs that are not moving in that moment (with the brake activated), while make the next step with the fourth leg. The most common braking systems are mechanic, whether using an electro- magnetic brake or some other kind of friction-based brake in addition to any sort of actuator, e.g., hidraulic, electric, . . . Even though they have been deeply studied, there are some disadvantage by using mechanic braking systems, i.e., the high prices and the bad holding torque/weight relation, important aspect for a legged robot. This thesis presents a conceptual idea for a braking system based on the thermodinamic control of Hot Melt Adhesive (HMA), as well as the basic char- acteristics of this material and a long leg prototype which shows the feasibility of this concept.
SubjectsRobots -- Design and construction, Brakes, Mechanical movements, Adhesives, Hot melt, Robots -- Projectes i construcció, Frens, Moviments mecànics, Adhesius termofusibles
ProvenanceAquest document conté originàriament altre material i/o programari no inclòs en aquest lloc web
DegreeENGINYERIA INDUSTRIAL (Pla 1994)
URIhttp://hdl.handle.net/2099.1/14953
Collections
Share: