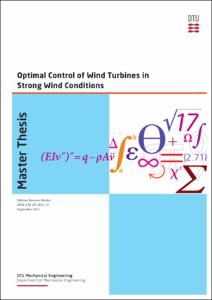 Show full item record
Barroso Montes, Melissa
Tutor / director / evaluatorZhong Shen, Wen
Document typeMaster thesis (pre-Bologna period)
Rights accessOpen Access
Abstract
At present, wind turbines normally run at a wind speed in the range between 5m/s and 25m/s. If the wind speed excesses 25m/s, the wind turbines should be shut down and cut off from the elctrical grid immediately. The wind turbines will wait to restart and connect with the electrical grid again after the wind speed value below a certain value. However, this control strategy has a significant drawback, which will cause impact to the electrical grid when wind turbines cut off and connect back to the grid. In an earlier student project a model for this problem has been developed and the loads under these conditions were analyzed, while a PI controller was designed to control the turbine, following a decreasing power reference curve in function of wind speed. The controls were designed to have smaller loads above 25m/s than at 25m/s. The first step of this project is to find an optimal power reference curve for wind speeds above the 25m/s, which takes into account the issues of: power smoothness, power maximization, load limits, etc. The next step would be to design an optimal controller which should follow the power reference, as well as control the loads and speeds of the wind turbine.
SubjectsWind turbines, Device drivers (Computer programs), Aerogeneradors, Controladors
URIhttp://hdl.handle.net/2099.1/14910
Collections
Share: