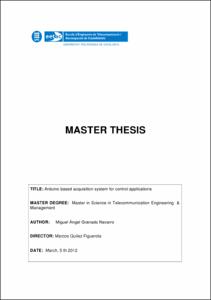 Document typeMaster thesis
Rights accessOpen Access
Abstract
The aim of this project is to design an implement a low cost acquisition system intended for control applications using the Arduino prototyping platform. Arduino has become a popular open-source single-board microcontroller among electronic hobbyists, and it is gaining acceptance as a quick prototyping tool for engineering and educational projects also. A computer, using a control application done in LabVIEW or IDE Arduino, must control all the system by cable or wireless. The project is divided in four chapters. In the first chapter, the project definition is introduced detailing each one of the requirements and specifications must meet the overall system. In the second chapter, it describes an acquisition system and the components involves as well as all the stages where the data is added. The third chapter shows the platform selected to implement the overall system. For the selection of each component, it has considered different alternatives according to the requirements specified on the project definition. Finally, in the last chapter, it deploys an application to check the correct performance of the overall system. In this case, the application selected is based in a temperature control of a water jug. With this objective, it has been considered various scenarios using some components of the platform. Basically, in the scenario where all the stages happen on the Arduino module is known as autonomous system. In contrast, when these stages are divided between the Arduino module, and other system, the scenario is known as dependent system.
SubjectsAutomatic control, Arduino (Computer language), LabVIEW, Control automàtic, Controladors programables, LAbVIEW (Programes d'ordinador), Arduino
URIhttp://hdl.handle.net/2099.1/14841
Collections
Share: