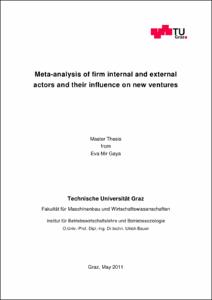 Show full item record
Mir Gaya, Eva
Tutor / directorFlanschger, Andreas
Document typeMaster thesis (pre-Bologna period)
Rights accessOpen Access
Abstract
An entrepreneur is a person who is able to discover opportunities and exploit them. In order to be successful in the creation of a new venture some factors as technological and managerial skills, economic knowledge and a good network are needed. The entrepreneur in which the study is focused, is a person with technological skills but who is missing most of the other characteristics making difficult the development and success of new ventures. With the aim to help entrepreneurs to understand the most important actors for new ventures, it is created the present study called: ―Meta analysis of firm internal and external actors and their influence on new ventures. Then, as it has been said, the main goals are identify which actors have influence on a new venture and how significant is the mentioned influence. In order to reach the targets, first of all the potentially suitable studies were identified, then a working table was created in order to identify the actors, their influences and the importance of them. Finally, each actor and its influence were evaluated through a five point scale where one was the minimum punctuation and five the maximum. The results of the meta-analysis identify ten different actors and twenty-seven factors influenced by the mentioned actors. Between them, the most important actors are life cycle, social capital, human capital and venture capitalist. The main factors influenced by the actors are achieving competitive advantage, alliance formation, establishing knowledge, management control systems, management accounting systems and the networking process. It has to be considered that life cycle has been obtained as one of the main firm actors but it only appears in a couple of papers. Because of that, more papers identifying life cycle as the main actor should be studied in order to assure the result. The present study also introduces a future line of research and it suggest that the different relationships between the actors should be studied because one of the actors could influence another one.
SubjectsNew business enterprise Management, Empreses -- Creació -- Direcció i administració
DegreeENGINYERIA D'ORGANITZACIÓ INDUSTRIAL (Pla 2000)
URIhttp://hdl.handle.net/2099.1/14771
Collections
Share: