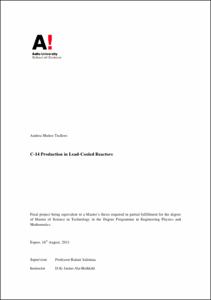 Show full item record
Muñoz Trallero, Andrea
Tutor / directorRainer Salomaa
Document typeMaster thesis (pre-Bologna period)
Rights accessOpen Access
Abstract
The increase in the energy consumption and the expected growth in the nuclear capacity make it necessary to look on for new technologies based in more sustainable and safe principles, such as lead-cooled reactors. This technology has been studied intermittently since the 1950s and is being considered nowadays as one of the six Generation IV reactor designs. New fuels compatible with lead coolant are also being studied and nitride fuels seem to be the best alternative. The aim of this work is to offer an overview about the use of lead as coolant in fast reactors and to study the use of Uranium Nitride (UN) as fuel in this technology. UN seems to have proper thermal and physical characteristics and is chemically stable, but its production presents some difficulties and radioactive 14C is generated when it is irradiated inside the core. This work is focused in studying the 14C production in lead-cooled reactors and determining the necessary 15N fuel enrichment to produce a similar amount of 14C as in thermal nuclear reactors. With this purpose, a Monte Carlo code named Serpent is used to run several pin cell simulations with different 15N enrichments. The results obtained show a clear dependence between the 14C production and the 15N enrichment, as it was expected, and also a linear relation between 14C production and burnup.
SubjectsNuclear reactors, Reactors nuclears
DegreeENGINYERIA INDUSTRIAL (Pla 1994)
URIhttp://hdl.handle.net/2099.1/14745
Collections
Share: