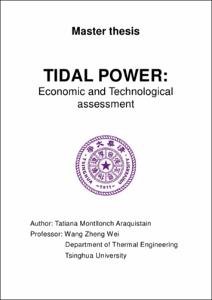 Show full item record
Montllonch Araquistain, Tatiana
Tutor / directorZheng, Wang
CovenanteeQing hua da xue
Document typeMaster thesis (pre-Bologna period)
Rights accessOpen Access
All rights reserved. This work is protected by the corresponding intellectual and industrial property rights. Without prejudice to any existing legal exemptions, reproduction, distribution, public communication or transformation of this work are prohibited without permission of the copyright holder
Abstract
At present time there is concern over global climate change, as well as a growing awareness on worldwide population about the need on reducing greenhouse gas emissions. This in fact, has led to an increase in power generation from renewable sources. Tidal energy has the potential to play a valuable role in a sustainable energy future. Its main advantage over other renewable sources is its predictability; tides can be predicted years in advanced. The energy extracted from the tides can come from both, the vertical movements of the water associated with the rise and fall, potential energy, and from the kinetic energy, namely, tidal currents. A tidal barrage harnesses the potential energy while tidal stream turbines capture the energy from tidal currents. This thesis reviews the physical principles of tidal energy considering gravitational effects of sun and moon; semidiurnal, diurnal and mixed tides, and periodic phenomena that affect tidal range. Moreover, an up-to-date review of the status of tidal energy technology is included. Furthermore, the different tidal conversion systems are introduced, tidal barrage and tidal stream turbines. The current issues for both technologies are presented, aiming to place the reader on the current situation. The thesis also contains an economic assessment, where the current costs of both technologies as well as an estimation of the future costs are shown. The levelised costs of energy (LCOE), which measure the cost of the generated electricity, are also calculated and compared. From this chapter it is concluded, that although tidal current has very high costs, it has a clear potential to become competitive with other generation forms in the future as costs will considerably decrease as the installed capacity increases. On the other hand it is said that although tidal barrage is a mature technology has very high costs, however its deployment can bring several benefits. Finally a technological report is included. The purpose of it is to identify which technology, one direction or two-direction turbines, can generate more electricity under the same operating conditions. It also includes a cost analysis of both types of devices. The conclusion raised considering the electricity generated as well as the technology costs is that bi-directional devices have lower energy costs.
SubjectsTidal power, Energia maremotriu
DegreeENGINYERIA INDUSTRIAL (Pla 1994)
URIhttp://hdl.handle.net/2099.1/14731
Collections
Share: