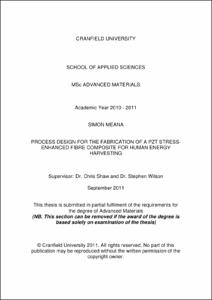 In the modern world in which we live, we are surrounded by portable electronic devices limited in terms of time and energy, by the batteries they need and utilize. There are abundant types of energies in the environment which, in fact, represent an infinite source, such as the one produced by human. We might take advantage and utilize this energy in our favour and thus, we could have an extra source of power for our portable electronic devices. This thesis aims to discuss a design method for the fabrication of an active fibre composite (AFC) capable of producing electric energy from body movements, such as the stretching of the thigh when walking or the stretching produced in the thoracic cavity when breathing. These types of movements would exert a bending stress and a force of around 1 N in the composite. An AFC is a composite composed by a polymer matrix, which contains piezoelectric fibres inside, able to produce electric energy when submitted to stress (and vice-versa) and some electrodes which are responsible of conducting the electricity between the fibres and either the battery or directly the electronic device. As a result of this research, a promising method has been proposed in order to fabricate the composite utilizing SBXTM liquid resist emulsion, PZT5A piezoelectric fibres and an interdigitated electrode (IDE). For this IDE, three techniques have been attempted: evaporation, sputtering and screen-printing, made from a combination of gold and chromium, aluminium and from silver epoxy respectively. In this thesis, two polymers namely PDMS and SBX have been considered as a matrix, SBX being more adequate. Two different ways to align the fibres in the polymer matrix were proposed, aligning with designed masks and with a rig frame. Tests results and graphs have been generated with regard to the behaviour of SBX in terms of shrinkage when casted and the relation between the rotational speed and thickness when spun. This investigation also contains data with relation to the curing and development of the SBX, in addition to mechanical tests done to different samples with a Deben Microtester. Eventually, some ideas have also been included on how to arrange carbon or glass fibres around the PZT fibres in a later stage, so as to enhance the stress by applying increased stress in different places along them.
SubjectsPower resources, Human mechanics, Electronics -- Apparatus and appliances, Piezoelectricity, Fibrous composites, Fonts d'energia, Mecànica humana, Dispositius mòbils, Piezoelectricitat, Compostos fibrosos
URIhttp://hdl.handle.net/2099.1/14715