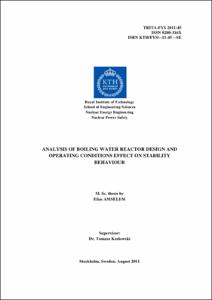 Show full item record
Amselem Abecasis, Elias
Tutor / directorKozlowski, Tomasz
Document typeMaster thesis (pre-Bologna period)
Rights accessOpen Access
All rights reserved. This work is protected by the corresponding intellectual and industrial property rights. Without prejudice to any existing legal exemptions, reproduction, distribution, public communication or transformation of this work are prohibited without permission of the copyright holder
Abstract
It is well known that boiling water reactors can experience inadvertent power oscillations. When such instability occurs the core can oscillate in two different modes (in phase mode and out of phase mode). In the late 90’s a stability benchmark was created using the stability data obtained from the experiments at the Swedish nuclear power plant of Ringhals-1. Data was collected from the cycles 14, 15 , 16 and 17. Later on, this data was used to validate the various models and codes with the aim of predicting the instability behavior of the core and understand the triggers of such oscillations. The current trend of increasing reactor power density and relying on natural circulation for core cooling may have consequences for the stability of modern BWR’s designs. The objective of this work is to find the most important parameters affecting the stability of the BWRs and propose alternative stability maps. For this purpose a TRACE/PARCS model of the Ringhals-1 NPP will be used. Afterwards a selection of possible parameters and dimensionless numbers will be made to study its effect on stability. Once those parameters are found they will be included in the stability maps to make them more accurate.
SubjectsBoiling water reactors -- Stability, Reactors nuclears d'aigua bullent -- Estabilitat
DegreeENGINYERIA INDUSTRIAL (Pla 1994)
URIhttp://hdl.handle.net/2099.1/14673
Collections
Share: