Employee Stock Options and Share Repurchases: An Empirical Study of the Swedish Market 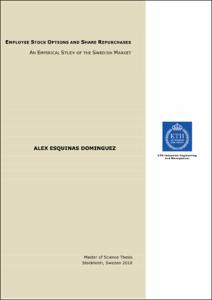 Show full item record
Esquinas Dominguez, Alex
Tutor / directorSorensson, Tomas
Document typeMaster thesis (pre-Bologna period)
Rights accessOpen Access
All rights reserved. This work is protected by the corresponding intellectual and industrial property rights. Without prejudice to any existing legal exemptions, reproduction, distribution, public communication or transformation of this work are prohibited without permission of the copyright holder
Abstract
During the lasts two decades, the employee stock option plans (ESOPs) have become more important in the global remuneration polices to first level executives. As a consequence of this, the repurchase activity has been increased to face the exercise of those options. This text is committed to give the reader a general overview of the ESOPs and share repurchases (SR), as well as analyse the current situation in some of the biggest companies in Sweden. To do this, the following report is divided in two main parts; first it will be introduced “why” and “when” ESOPs are profitable for the company and which facts could influence a company to start a buyback of own shares. The second part will introduce the data collected from the annual reports of the Swedish companies and will analyse if the fact of having an ESOP implemented influences the choice on the benefits distribution method. Considering the tightly relation between share repurchases and dividends distributions, this text includes a small summary of the impact of the ESOPs in the dividends polices. For that reason, the database also includes data regarding to the share yields and profit distribution. After having analysed all the data collected, the results point to a non-influence of the Employee Stock Option Plans on the benefits distribution method. Thus, a significant difference between the fraction of total number of shares repurchased and the dividend yield in companies with and those without outstanding stock options among their managerial group cannot be confirmed. Although having found a non-significant difference on the dividend treatment between companies with and without stock options, a weak negative relation between the magnitude of the ESOP and the dividend yield was found for those companies with stock options among their managerial group. Moreover, after having divided the sample depending on the type of stock options their managerial group held, the results show a slight difference between those companies with outstanding warrants and employee options; and those without stock options. Despite this fact, it is not possible to assert a real influence of these facts due to a not enough number of observations gathered for the sample.
SubjectsStock options, Opcions (Finances)
ProvenanceAquest document conté originàriament altre material i/o programari no inclòs en aquest lloc web
DegreeENGINYERIA INDUSTRIAL (Pla 1994)
URIhttp://hdl.handle.net/2099.1/14642
Collections
Share: