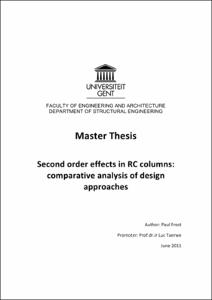 Show full item record
Frost Perez, Paul
Tutor / director / evaluatorTaerwe, Luc
Document typeMaster thesis (pre-Bologna period)
Rights accessOpen Access
Abstract
The objective of this project is to analyze different design approaches for RC columns, in particular those cases in which second order effects should be considered when the column is under compression. Throughout the study, a variety of support cases and different types of section will be presented for columns of different slenderness ratios. These cases will be resolved using the Simplified Methods provided in Eurocode 2 and the evolution of second order effects with the slenderness ratio will be studied. Within this study, the influence of creep, area of reinforcement and area of concrete in the second order moment will be investigated, to then discern the differences between the Nominal Stiffness and the Nominal Curvature methods. It will be determined that in the Nominal Stiffness method creep has an increasing effect as the slenderness ratio increments. Creep will have an effect in the Nominal Curvature method until a certain slenderness value is achieved, which depends on the compressive characteristic strength. When studying the influence of the areas of reinforcement and concrete in taking into account second order effects, it will also be deduced that increasing the area of reinforcement is a good solution if the slenderness only just exceeds the slenderness limit. If the slenderness is much higher than the limit, then it is better to increase the area of concrete since it will increase the limit and reduce the slenderness more effectively. The differences found between the three types of sections will also be a subject of study. These sections will be rectangular with reinforcement placed in opposite sides, rectangular with uniform distribution of reinforcement and circular with uniform distribution of reinforcement. The first section is the least affected by second order effects whilst the second section is the most affected. For the calculations, a tool in the form of a spreadsheet for the Simplified Methods will be created with the purpose of being intuitive to use and generate output values automatically. Finally, columns of different slenderness ratios will be modeled and tested by means of a finite element (FEM) analysis. The results of the evolution of the second order moment with the slenderness ratio will be compared to those obtained through the Simplified Methods and will prove to be quite similar.
SubjectsColumns, Concrete -- Design and construction, Columns, Concrete -- Mathematical models, Columnes de formigó -- Disseny i construcció, Columnes de formigó -- Models matemàtics
ProvenanceAquest document conté originàriament altre material i/o programari no inclòs en aquest lloc web
URIhttp://hdl.handle.net/2099.1/14626
Collections
Share: