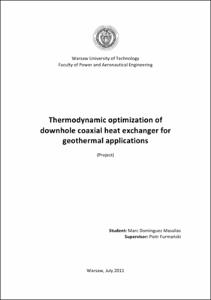 4 Introduction Currently fossil fuels - coal, oil and natural gas - provide about 85% of the world’s total energy demand (including heating, transport, electricity generation and other uses). But, unfortunately, these types of energy resources have some negatives points. Fossil fuels are non-renewable resources because they take millions of years to form, and reserves are being depleted much faster than new ones are being formed. Another negative aspect is that burning such fossil fuels results in major environmental deterioration. Trying to restrain this rapidly growing environmental pollution, authorities have more and more frequently turned towards alternative energy sources (renewable), among which geothermal energy plays a significant role in some countries. Geothermal energy is the heat from the Earth. Resources of geothermal energy range from the shallow ground to hot water and hot rock found a few kilometres beneath the Earth's surface. The main inconvenience of this energy source is the hardly economical cost of drilling new wells. Therefore, attempts are being made to adapt existing boreholes, mostly drilled by the hydrocarbon industry, for geothermal utilization. In this context, deep borehole heat exchangers are an environmentally advantageous way for geothermal energy production. In this project, a downhole coaxial heat exchanger (DCHE)/heat pump (HP) system is simulated for shallow geothermal resources exploitation. The downhole, coaxial heat exchanger is designed for two different scenarios according to the working medium; one using water as a working fluid and the other one using air. The hot water produced will be used for space heating and domestic hot water production for a Central European home offering an attractive way to supply local housing with heat for direct use. All these systems need an electrical heat pump (HP) by which the low DCHE output temperature (rarely above 10 ºC) can be lifted to the required level (35-50 ºC). Heat extraction is established by closed-circuit fluid circulation. In this project, a thermodynamic design for determining some optimal parameters of the heat exchanger is presented. In this study, optimum diameter and thermal resistance for the insulated inner pipe is determined by using the second law of thermodynamics. The purpose of a thermodynamic design is to achieve a working system. A goal of the design is high efficiency; minimization of entropy generated (exergy destruction) is a way to achieve this.
SubjectsGeothermal resources, Heat exchangers, Energia geotèrmica, Bescanviadors de calor
ProvenanceAquest document conté originàriament altre material i/o programari no inclòs en aquest lloc web
URIhttp://hdl.handle.net/2099.1/14574