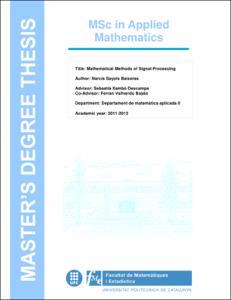 Except where otherwise noted, content on this work is licensed under a Creative Commons license : Attribution-NonCommercial-NoDerivs 3.0 Spain
Abstract
The aim of this project is to present in a systematic way the more relevant mathematical methods of signal processing, and to explore how they are applied to speech and image precessing. After explaining the more common parts of a standard course in signal processing, we put special emphasis in two new tools that have played a significant role in signal processing in the past few years: pattern theory and wavelet theory. Finally, we use all these techniques to implement an algorithm that detects the wallpaper group of a plane mosaic taking an image of it as input and an algorithm that returns the phoneme sequence of a speech signal. The material in this memory can be grouped in two parts. The first part, consisting of the first six chapters, deals with the theoretical foundation of signal processing. It also includes materials related to plane symmetry groups. The second part, consisting of the last two chapters, is focussed on the applications.
SubjectsInformation theory, Coding theory, Informació, Teoria de la, Codificació, Teoria de la
DegreeMÀSTER UNIVERSITARI EN MATEMÀTICA APLICADA (Pla 2009)
URIhttp://hdl.handle.net/2099.1/14560
Collections
Share: