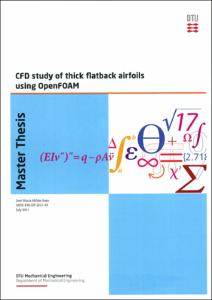 New airfoil designs are created in order to improve both the structural and aerodynamic properties of a wind turbine blade, one example of these are flatback airfoils. Furthermore, a new CFD programme exists in order to study the behavior of the flow around an airfoil, OpenFOAM. The flow around these new airfoils using OpenFOAM is studied in the present thesis. It is used the turbulence model k-! SST for fully turbulent boundary layer and free transition at the boundary layer, modeled with the Re t− transition model. At the beginning of the present thesis the programme OpenFOAM is validated by doing different sensitivity studies on a thin airfoil (NACA0012) and then it is validated by comparing results obtained ANSYS CFX, Ellipsys and wind tunnel experiments. It is seen good agreement of OpenFOAM’s results with these other results just mentioned. It is seen that, making flatback airfoils which are very thick (with a relative thickness of 48 % and 57 %) by opening the trailing edge thickness the same percentage towards both pressure and suction side, much better aerodynamic characteristics are obtained. For example, while thickening the trailing edge of one airfoil 20 %, the lift coefficient is increasing 180 % and the lift-to-drag ratio 140 % for the range they are supposed to operate. While making flatback airfoils that are 35 % and 36 % thick relative to the chord, this increment in the lift-to-drag ratio is not observed. The behavior of the flow around a flatback airfoil is studied by increasing its chord into the dead water zone created behind the airfoil. The same pressure distribution on the wall of the modified versions is observed as for the former flatback airfoils. The friction coefficient is also very similar. Thus, the flatback airfoils studied with OpenFOAM are profitable for the inner sections of the blade of a wind turbine, where very thick airfoils are found.
SubjectsWind turbines, Aerofoils, Aerodynamics, Computational fluid dynamics, Aerogeneradors, Superfícies de sustentació, Aerodinàmica, Dinàmica de fluids -- Simulació per ordinador
URIhttp://hdl.handle.net/2099.1/14489