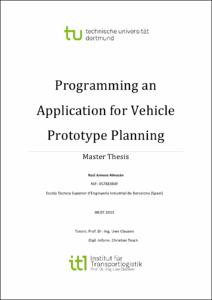 Show full item record
Armero Almazán, Raúl
Tutor / directorTesch, Christian
Document typeMaster thesis (pre-Bologna period)
Rights accessOpen Access
Abstract
This project consists on programming an application, which is able to compute a list of Prototypes to be built by working with a list of Tests and given component constraints. The created “Prototype Planning” application generates different solutions throughout three different programming methods (each one of them was improved from the previous one). It also has three sub-applications integrated to test these versions with different input times. The application is written in C# using “Microsoft Visual Studio 2010 Ultimate”. The lists of Prototypes generated with version 1 gives a correct solution but the solution is not satisfactory, because there are many Prototypes that have a low duration at the end of the list. This problem is solved by creating version 2 with the implementation of a new programming method. As a result, the solution by version 2 is rather accurate to what the vehicle manufacturer needs. In version 3, not only the Prototype components are chosen, but also a time schedule is implemented. Despite this version giving a higher number of Prototypes, it is expected to find this result because the time limit of each Prototype was increasing. Finally, in version 4, a new hypothesis is computed to reduce the amount of Prototypes and to create a programming method more accurate to the reality. Prototype planning and scheduling is a complex field, which much research have been based on. Consequently, this application is far from producing the optimal solution to the problem, but by adding more improvements to the application, the final aim of obtaining the definitive application is possible.
SubjectsVehicles--Design and construction, Computer software - Development, Microsoft Visual Studio, Testing, Vehicles -- Projectes i construcció, Programes d'ordinador – Desenvolupament, Microsoft Visual Studio, Vehicles – Proves
ProvenanceAquest document conté originàriament altre material i/o programari no inclòs en aquest lloc web
DegreeENGINYERIA INDUSTRIAL (Pla 1994)
URIhttp://hdl.handle.net/2099.1/14481
Collections
Share: