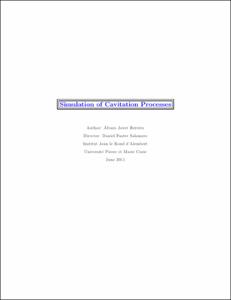 Show full item record
Jover Herrero, Álvaro
Tutor / director / evaluatorFuster Salamero, Daniel
Document typeMaster thesis (pre-Bologna period)
Rights accessOpen Access
Abstract
Cavitation is the formation of empty cavities in a liquid by high forces and the immediate implosion of them. It occurs when a liquid is subjected to rapid changes of pressure causing the formation of cavities in the lower pressure regions of the liquid. Cavitation processes can produce high temperatures (10.000 ◦C) and pressures (1.000 atm) inside the bubbles and also generate micro jets produced by the asymmetric implosions of the bubbles. This phenomenon has been investigated during the last century in order to avoid its appearance because it has, in general, negative consequences for both naval and aeronautics industries (noise, loss of performance and component damages). In the last years some applications based on cavitation have been developed and cavitation studies have been focused on how to control it. It is not difficult to find applications in different fields such as chemistry, biomedicine, cleanliness and military weapons. The idea of this Master Project is to investigate the most relevant parameters controlling bubble clusters implosions. In order to achieve this, I have been working with a code, which can reproduce bubble implosions in a compressible liquid. This project, funded by the oil company Total, is part of experimental studies, located in Saint Cyr, and computational investigation, currently undertaken at the hosting Institute Jean le Rond d’Alembert. The experimental facility consists of an apparatus which is able to inject air in to a fluid and later, and with the help of a piston, hit it to produce a pressure wave that induces cavitation. Two pressure transducers have been installed, one on the top of the chamber and one at the bottom in order to have exact measures of the pressure wave evolution. A high speed camera allows to record the bubble response. The experiments are controlled by a computer and an oscilloscope. The final goal of this study is to provide guidelines about the influence of different parameters on the conditions generated inside the chamber.
SubjectsCavitation -- Computer simulation, Cavitació -- Simulació per ordinador
URIhttp://hdl.handle.net/2099.1/14458
Collections
Share: