Preview of different technologies to obtain zinc from zinc oxide 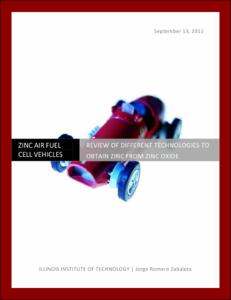 Several methods to recover zinc from zinc oxide are reviewed and are put in the context of Zinc-Air Fuel Cells (ZAFC) feasibility to power electric vehicles (EVs). These methods can be classified in two groups: electrowinning and carbothermal. Electrowinning methods are based on electrolysis, have been employed since decades in the conventional zinc production and are found to be very convenient for this application if the electricity needed is generated from renewable sources. Carbothermal methods are recent but have great potential, especially the SOLZINC process where biomass-based carbon feedstock is used to lower the operating temperature and reduce energy losses. Finally, three fuel reprocessing and distribution models are analyzed: centralized, distributed and in-car model. Three stages to implement ZAFC recharging systems are identified, starting with centralized model due to economies of scale and ending in in-car reprocessing model due to its full potential to compete with existing and future plug-in EVs.
SubjectsZinc oxide -- Recycling, Zinc, Fuel cells, Electric vehicles -- Batteries, Electrometallurgy, Reduction (Chemistry), Òxid de zinc -- Reciclatge, Zinc, Piles de combustible, Vehicles elèctrics -- Bateries, Electrometal·lúrgia, Reducció química
URIhttp://hdl.handle.net/2099.1/14452