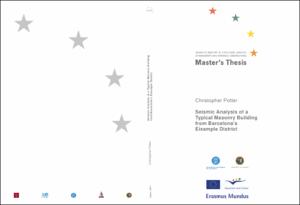 Except where otherwise noted, content on this work is licensed under a Creative Commons license : Attribution-NonCommercial-NoDerivs 3.0 Spain
Abstract
The historic Eixample district of Barcelona is characterised by its beautiful avenues, laid out in grid across the city. At first impression, the buildings lining these avenues appear identical, an unending façade built to house the new Barcelona of the 20th Century. The unreinforced masonry buildings that typify the development remain in use today, largely unaltered since their construction. Unreinforced masonry buildings are among the most vulnerable structures to damage from seismic actions. For the masonry buildings of the Eixample that house over 15% of the population of Barcelona, this is no exception. This study performs a seismic analysis on a typical masonry building of the Eixample to estimate and assess this damage. By doing so, it aims to estimate the likely damage due to seismic actions, to identify critical elements of the structures and to quantify the need for seismic risk maintenance and response plans. The analysis uses the N2 Capacity Spectrum Method (Fajfar, 2000), adopted by Eurocode 8, to determine the displacement demand of possible earthquake scenarios. A seismic hazard analysis determines the seismic demand using deterministic, probabilistic and current European and Spanish code provisions. The seismic demand is then compared to the results of a non-linear pushover analysis completed using software DIANA (Version 9.4). The model geometry was based upon plans of a building that well represents the typical unreinforced masonry buildings of the Eixample. Results indicate a displacement demand to Spanish code provisions that corresponds to a substantial level of damage, in accordance with the European Macroseismic Scale (EMS 98) damage criteria. A moderate level of damage is derived from the probabilistic seismic scenario. Similar to previous studies, these results indicate a significant risk of seismic damage. The analysis has isolated critical structural elements that control the global response and damage during seismic action. This information can be used to develop inspection and maintenance plans to limit the risk of seismic damage. This study highlights the real risk of seismic damage to the typical unreinforced masonry buildings of the Eixample district. It determines appropriate building maintenance procedures, and reinforces the need for seismic response planning to best manage the significant expected social and infrastructure demands should such a disastrous event ever occur.
SubjectsEarthquake hazard analysis, Masonry, Eixample (Barcelona, Spain), Eixample (Barcelona, Catalunya), Ram de paleta, Risc sísmic -- Barcelona (Catalunya)
URIhttp://hdl.handle.net/2099.1/14432
Collections
Share: