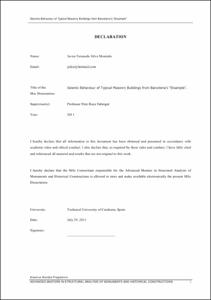 The development of the district of the Eixample started in 1860. During 90 years of construction, the repeatable model that gives the characteristic homogeneity to the district was improved and perfected. As a result of this process, the Eixample district is today, without any doubts, the most representative of the central part of the city of Barcelona. The district of the Eixample has the second highest population density in Spain and nearly 70% of its buildings have a structural system that consists of unreinforced masonry bearing walls. During post-earthquake surveys performed on different historic European towns with this typology of buildings, collapse mechanisms that involve only localized portions of the building and not the entire structure have been identified. In this study, a seismic analysis of local collapse mechanisms is performed on a building that represents well the typology found in the district. The selected building corresponds to the “band” building plan configuration, located at the sides of the square blocks that conform the district. The capacity spectrum method for local collapse mechanisms proposed by the Italian Normative DM-14-01-08 is used in this study to evaluate the seismic vulnerability of the typical unreinforced masonry buildings of the Eixample district. In this methodology the capacity curve is determined based on the equilibrium limit analysis, in particular the kinematic approach (Heyman, 1966). The seismic hazard is characterized by the demand spectra formulated by the Eurocode 8, the Spanish normative NCSE-02, and by demand spectra developed for the city of Barcelona by Irizarry (2004) using probabilistic and deterministic approaches. As part of the study a strengthening intervention is proposed. The results of the analysis indicate that the safety of out-of-plane mechanisms is not verified when the NCSE-02 types III and IV, and the Probabilistic Zone I spectra are considered. In several cases, the instability of the floor framing system due to the loss of support of the beams on the bearing walls controls the safety verification. Conversely, the in-plane mechanisms are safe for the seismic scenarios considered. The results of a parametric study reveal that the actual support length of the beams on the walls has a significant impact on the safety verification of the mechanisms, especially when frictional restrain forces are considered. The proposed intervention using steel ties effectively restrains the development of out-of-plane mechanisms and ensures the stability of the floor framing system. The study highlights the considerable seismic risk of the masonry buildings of the Eixample district.
SubjectsBuildings--Earthquake effects, Earthquake engineering, Edificis -- Efectes dels terratrèmols, Enginyeria sísmica
URIhttp://hdl.handle.net/2099.1/14379