Comparison between a tubular frame and a beam frame 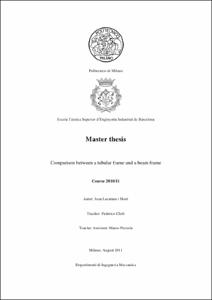 Show full item record
Locutura Moré, Joan
Tutor / directorFederico Cheli
Document typeMaster thesis (pre-Bologna period)
Rights accessOpen Access
All rights reserved. This work is protected by the corresponding intellectual and industrial property rights. Without prejudice to any existing legal exemptions, reproduction, distribution, public communication or transformation of this work are prohibited without permission of the copyright holder
Abstract
Nowadays, at Moto2 Championship there are mainly two kinds of frames talking about profiles (“square” the majority of them like Suter, FTR or Moriwaki and tubular some of theme MZ and Promoharris). At this work is going to be compared which are the mechanical differences between a tubular and square (no tubular) frame about stiffness, torsion and flexional resistance, weight, inertia,... and trying to take some conclusions. This project is composed by two parts: - The first one is a bit of general information talking about the history of motorcycles (particularly frames field), then there is a short introduction about which kind of frames exists, a description on important points that define motorcycle’s geometry and finally, the materials that frames are made of. (Chapters 3 to 5) - Second part, it’s the static and dynamic comparison between two frames. The first frame is made of steel and its tubular profile while the second one is a frame made of aluminium and its square profile. Both are drawn by SolidWorks and then analyzed by ANSYS with their belonging forces. To improve the results there is an optimization part. Some hypotheses are considered to do the analysis a bit less complex. An analysis on mechanical fatigue, modes on vibrations and own frequency are done too. Also there is a section about how frames could be manufactured, their weldings needed and a small study about cost. (Chapters 6 to 13). Finally, there is a short chapter about environment (energy wasted to do the frame (approximated) and to do this master thesis). It is an important thing to be considered for now, next future and future. (Chapter 14)
SubjectsMotorcycles -- Design and construction, Aluminum -- Fatigue, Steel -- Fatigue, Motocicletes -- Disseny, bastidor, Alumini -- Fatiga, Acer -- Fatiga
ProvenanceAquest document conté originàriament altre material i/o programari no inclòs en aquest lloc web
DegreeENGINYERIA INDUSTRIAL (Pla 1994)
URIhttp://hdl.handle.net/2099.1/14372
Collections
Share: