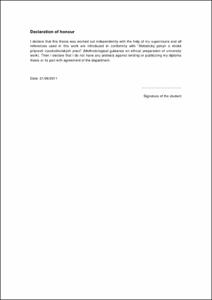 Show full item record
Buera Surribas, Pau Francesc
Tutor / directorSotsdirector de Relacions Internacionals
Document typeMaster thesis (pre-Bologna period)
Rights accessOpen Access
Abstract
The use of beams with sinusoidal corrugated web is increasing since their appearance. This kind of beams is mainly in Austria and Germany, but the surrounding countries are starting to use them more and more. These steel beams are relatively new, so there is not much experimental data to help predicting their behaviour in certain conditions. At ambient temperature, for example, the standards (namely EN 1993-1-5) are related to the trapezoidally corrugated web beams. If the methodology explained in these papers is used the obtained design results are more conservative than necessary. In the case of fire design, so little tests have been carried out using this kind of beams that no rules can be developed from the obtained results. Focusing on this last aspect, the aim of this thesis is to use some experimental data of fire tests (one run in an oven and another one in which a natural fire was performed) to compare it with the theoretical results that would be obtained using the standards and also via a simulation with a finite elements software. The differences that may appear will be analysed to try to determine the keys that make these beams behave in an unpredictable way by the rules generated to predict the behaviour of the standard I-section beams. The range of this project is not supposed to be to present definitive proposals that may be included in the standards. As several analyses are presented in this thesis, the aim of it is to find out some aspects of the behaviour of the beams with corrugated web in case of fire that may become the start of new ways of investigation in further and deeper studies. That is to say, this is a general approach to the problem that may be useful to get some new ideas and to get to a point where to start from.
SubjectsGirders -- Testing, Building, Iron and steal, Fire resistant materials, Bigues -- Proves, Construccions metal·liques, Materials resistents al foc
ProvenanceAquest document conté originàriament altre material i/o programari no inclòs en aquest lloc web
DegreeENGINYERIA INDUSTRIAL (Pla 1994)
URIhttp://hdl.handle.net/2099.1/14371
Collections
Share: