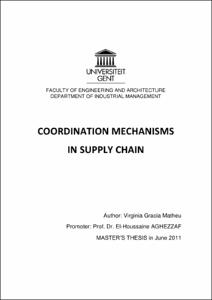 This thesis attempts to analyze coordination mechanisms between producers and suppliers in a supply chain. Since the entities in a supply chain work usually independently each from the other, it is of crucial importance to develop coordination mechanisms so that they can set their objectives together and coordinate their activities to optimize the global system performance. In the first part, some recent optimization models of coordination will be studied and discussed, like capacitated planning models for producers, lot-sizing models for suppliers and the ideal model with cooperation and sharing information from both parties. The second part will consist in extending some of these coordination models to include some additional furthers. For example, some models will be extended to the case where more competing suppliers and producers are involved. Then, a numerical investigation will also be undertaken to compare the different types of anticipation of the producer and their effects, compared to an ideal situation which performs a complete integration of the supplier into the producers model, a situation that is really difficult to apply in the real world. Moreover, the same investigation through the extended models would be undertaken to test and validate these new models. There will be a comparison between three types of models, concerning the effect of incrementing the number of suppliers, the number of producers and the number of both of them. Finally, it will be deduced that the best model for the producer would be having a reactive anticipation of the supplier’s model, that is create a closer coordination which will benefit not only the producer but also the supplier. Although it is difficult to implement compared with the other two models and the information about the supplier is difficult to find, it would have a really good improvement on the final cost nearly as good as the ideal model. Related to the multiple parties, it has been concluded that in general terms the best model is the one with an individual producer and supplier. But looking more in detail there are some improvements in the total cost when the producer is divided by smaller producers, having less productivity each one. In that case, and depending on the features of the supplier, it may be some improvements on the total cost of the supply chain.
SubjectsBusiness logistics -- Management, Mathematical optimization, Logística (Indústria) -- Direcció i administració, Optimització matemàtica
URIhttp://hdl.handle.net/2099.1/14367