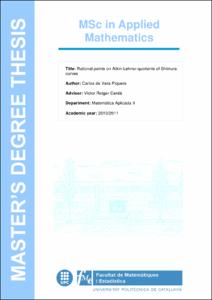 Document typeMaster thesis
Rights accessOpen Access
Abstract
Let X_B denote the Shimura curve defined by an indefinite rational quaternion division algebra B. By the work of Shimura, the curve X_B admits a canonical model over the field Q of rational numbers as a coarse moduli solution to the problem of classifying abelian surfaces with quaternionic multiplication by B. Jordan studied the problem of describing those imaginary quadratic fields K such that the set of K-rational points X_B(K) is empty, and his results have been interpreted recently by Skorobogatov in terms of descent. He found that the counterexamples to the Hasse principle arising from Jordan's work are accounted for by the Brauer-Manin obstruction. In this thesis, we use the ideas of Skorobogatov and the work of Rotger to obtain analogous results for certain Atkin-Lehner quotients of X_B, but over Q instead of over imaginary quadratic fields. We give sufficient conditions for these quotients to be a counterexample to the Hasse principle over Q and, in some cases, to be accounted for by the Brauer-Manin obstruction.. Let X denote the Shimura variety associated with a totally indefinite quaternion algebra B over a totally real field of degree n. Variety X admits a canonical model of dimension n over \Q as a coarse solution to the moduli problem of classifying abelian varieties of dimension 2n whose endomorphism algebra contains B. It is also equipped with a natural supply of involutions, introduced classically by Atkin and Lehner. The main aim of this project is studying the Hasse principle on these varieties and their quotients.
SubjectsAlgebraic number theory, Nombres, Teoria algebraica de
URIhttp://hdl.handle.net/2099.1/14287
Collections
Share: