Study and Implementation of some Quantitative Trading Models 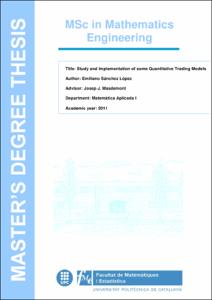 Except where otherwise noted, content on this work is licensed under a Creative Commons license : Attribution-NonCommercial-NoDerivs 3.0 Spain
Abstract
Quantitative or algorithmic trading is the automatization of investments decisions obeying a xed or dynamic sets of rules to determine trading orders. It has increasingly made its way up to 70% of the trading volume of one of the biggest nancial markets such as the New York Stock Exchange (NYSE). However, there is not a signi cant amount of academic literature devoted to it due to the private nature of investment banks and hedge funds. This projects aims to review the literature and discuss the models available in a subject that publications are scarce and infrequently. We review the basic and fundamental mathematical concepts needed for modeling nancial markets such as: stochastic processes, stochastic integration and basic models for prices and spreads dynamics necessary for building quantitative strategies. We also contrast these models with real market data with minutely sampling frequency from the Dow Jones Industrial Average (DJIA). Quantitative strategies try to exploit two types of behavior: trend following or mean reversion. The former is grouped in the so-called technical models and the later in the so-called pairs trading. Technical models have been discarded by nancial theoreticians but we show that they can be properly cast into a well de ned scienti c predictor if the signal generated by them pass the test of being a Markov time.That is, we can tell if the signal has occurred or not by examining the information up to the current time; or more technically, if the event is Ft-measurable. On the other hand the concept of pairs trading or market neutral strategy is fairly simple. However it can be cast in a variety of mathematical models ranging from a method based on a simple euclidean distance, in a co-integration framework or involving stochastic di erential equations such as the well-known Ornstein-Uhlenbeck mean reversal ODE and its variations. A model for forecasting any economic or nancial magnitude could be properly de ned with scienti c rigor but it could also lack of any economical value and be considered useless from a practical point of view.
SubjectsProbabilities ; Stochastic processes, Probabilitats ; Processos estocàstics
DegreeMÀSTER UNIVERSITARI EN ENGINYERIA MATEMÀTICA (Pla 2009)
URIhttp://hdl.handle.net/2099.1/14234
Collections
Share: