Historical and structural survey of the medieval stone bridge 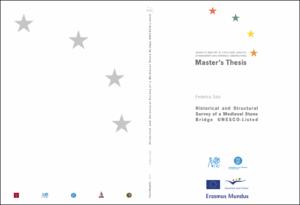 The built heritage has not only a great architectural importance, but plays also a historical and cultural role. In order to preserve a building, factors influencing its decay are to be investigated. Historical characterization of the structure should be considered as well as building techniques and used materials. The causes and the severity of the deterioration are the first factors to be identified for developing of an efficient intervention plan. A gothic stone bridge in Prague, recently matter of archaeological researches by the authorities, was considered as case study. Partially hidden under Prague Castle Staircase for centuries, the bridge is characterized by accurate details and remarkable building techniques. Built during the 15th century to cross the moat, it is evidence of the first fortification of Malá Strana. Due to its historical and engineering properties, it plays an extraordinary role in the medieval heritage of the Lesser Town. Unfortunately, the bridge is currently experiencing extend deterioration mainly caused by rising dampness, water seepage and salt attack. Historical survey was carried out as well as geological and structural survey. Tests on the materials and analysis of the causes were performed. Their results, remedial works and a maintenance plan are to be presented in the following paper.
SubjectsBridges, Stone -- Prague, Bridges, Medieval -- Prague, Ponts de pedra -- Praga, Ponts medievals -- Praga
URIhttp://hdl.handle.net/2099.1/14228