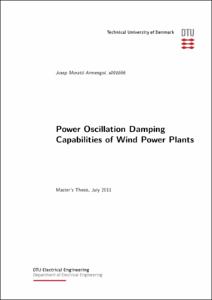 Wind power is growing in capacity and wind farms are reaching productions similar to those of conventional synchronous generators. If wind turbines gradually replace the production of the synchronous generators, many aspects of the power system operation and control might be affected, in which the small signal stability is included. Because wind turbine generators have to participate in the power oscillation damping, the impact of wind power on electromechanical power system oscillations is an important topic to consider. Additional control must be introduced for damping purposes where the appropriate selection of feedback signals plays an important role. The measured signals must be affected by the system oscillations and the actions taken must have a damping effect on them. The location of the wind farm is determined by other factors than those to damp system oscillations. Furthermore, the wind farms setup is not fixed due the number of turbines in operation may not constant, and this may affect the control. This thesis studies the effect of different power system operating conditions and changes in a wind farm layout to the power oscillation damping capabilities of a large wind power plant. This has not been seen in literature although the approach used here has been used similarly for studies with FACTS for damping purposes. Since the residues of a particular transfer function between the outputs and the inputs of the system give the sensitivity of the modes to this particular feedback, the method for the study is based on the residues of the electromechanical modes. The study is based in a fourteen-generator system. First, the small signal stability of the system is analyzed without wind power and then, the system is modified for including wind power. The effect of changes in the system over different feedback signals and over its control effectiveness are analyzed. For this purpose, modal analysis and time domain simulations are performed. The changes in the residues depending on different cases will provide a picture of which feedback signals would be more effective for damping purposes, as well as inputs for the decision of which type of control may be used. The main results reached in the study show that damping of electromechanical modes depends on the feedback signals and it is affected by different operating conditions of the system. Moreover, changes in the wind power plant layout do not affect appreciably the sensitivity of these modes to the feedback. In addition, the contribution to the damping for each WTG of the park is similar. Therefore, a centralized control could be applied for the entire WPP.
SubjectsWind power plants, Wind turbines, Oscillations, Damping (Mechanics), Parcs eòlics, Aerogeneradors, Oscil·lacions, Amortiment (Mecànica)
ProvenanceAquest document conté originàriament altre material i/o programari no inclòs en aquest lloc web
URIhttp://hdl.handle.net/2099.1/14164