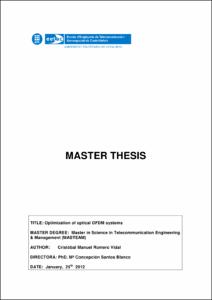 Document typeMaster thesis
Rights accessOpen Access
Abstract
Orthogonal frequency division multiplexing (OFDM) is a well-known modulation technique which is used in broadband wired and wireless communication systems, such as standard 802.11a/b/g/n, digital video broadcasting television (DVB-TV), and Long Term Evolution in the next mobile generation, due to its capacity in solving the problem of the Inter-symbol Interference caused by the effects of a dispersive channel. Since a few years ago, this technique has been used in optical communications which is the aim of this thesis. In this Master Thesis, the most relevant aspects of optical OFDM communication are described and implemented in optical simulation software called VPItransmissionMaker™ and VPIphotonicsAnalyzer™, (VPI). We find out that the OFDM coder and decoder provided by this program cannot be upgraded. This handicap does not allow modifying the main work algorithm and therefore the system cannot be improved. To solve this problem, it has been designed a Matlab OFDM coder and decoder to study the behaviour of optical OFDM systems using Intensity Modulation (IM) and Direct Detection (DD). As it will be detailed along the thesis, two different optical OFDM simulation scenarios using IM/DD are developed: an IM/DD RF and Hermitian Symmetry demos. Both of them are optical OFDM systems with an intensity modulation transmission and direct detection. The focus has been set primarily in obtaining a flexible, efficient and user-friendly simulation platform allowing for straightforward setup of advanced simulation of optical OFDM systems. The performance of these two scenarios is studied, taking advantage from the Simulation Script which VPI software provided in a more manageable mode, specifically, scripts using Tcl/tk language have been developed to derive power budget plots at desired Bit Error Ratio (BER).
SubjectsWireless communication systems, Orthogonal frequency division multiplexing, Comunicacions mòbils, Sistemes de, Comunicacions òptiques
URIhttp://hdl.handle.net/2099.1/14056
Collections
Share: