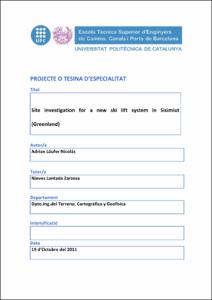 Document typeMinor thesis
Rights accessOpen Access
Abstract
Anglès: Greenlands second biggest city Sisimiut, which lies just above the Arctic Circle has increased in the recent years the number of incoming tourist. Aware of the touristic potential of the town and the interest of their inhabitants to have more numbers of ski slopes available, a local company is willing to build new ski lifts at Solbakken, where a lift is already built as well as create a new ski resort of international caliber North of Sisimiut. Like any other civil engineering work, the construction of new ski lifts need previous site investigations for the drafting of the project to identify potential hazards that may appear during construction and commissioning work. This study is based on previous site investigations carried out North of Sisimiut to see the feasibility of such project ensuring compliance with European standards in construction of ski lifts DS/EN-12929-1. Given the need to find the best location for the future ski lifts depending mainly on the compliance of the maximum height above ground, it was considered necessary to build a digital elevation model from which the best possible routes could be identified. In order to create such a DEM, GPS measurements were necessary in the areas where the ski lifts would be constructed, as the topographic information in this zone was not enough. The geological field investigations are basic for the drafting of a schematic on paper and therefore it was considered appropriate to conduct geomechanical classifications as rock mass rating (RMR) and the rock tunneling quality index Q. Also the results obtained from the point load index tests were included to characterized efficiently the intact rocks resistance to uniaxial stress. In the field investigations also measurements of the strike and dip direction of the main discontinuities were taken from the rock masses, so together with the results obtained from the DEM and the geomechanical rock classifications a stability analisis of the rock blocks with the kinematic method could be done. This type of analysis was realized in two different ways: first the classic method with stereographic projecciones and considering the average slopes of the lines and secondly with the use of GIS tools and the created DEM using all the different slope and orientation values of each individual rock block.
SubjectsDigital elevation models, Soil surveys, Mecànica dels sòls -- Prospeccions i sondatges
DegreeENGINYERIA DE CAMINS, CANALS I PORTS (Pla 1995)
URIhttp://hdl.handle.net/2099.1/14006
Collections
Share: