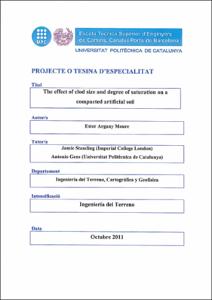 ; Standing, Jamie
Document typeMinor thesis
Rights accessOpen Access
Abstract
Anglès: The extremely complex nature ofthe physical properties ofunsaturated soils with three phase material such as a compacted clay containing both air and water as pare fluids, delayed considerably the development of an understanding of the behaviour of partially saturated soils. This issue plus the fact tbat soil mecbanics was first developed in northern Europe and north-east USA where the climate is cool and wet so that the unsaturated zone is nonnally where the constructions are implemented, prometed the study of fully saturated or completely dry soils. In recent times the lack of knowledge in partly saturated soils has been more pronounced as the construction activity has increased in many wanner areas, in which the soils are in this condition. And also many applications in common construction have been pointed out, like dams, embankments, road pavements, slopes ... The behaviour of unsaturated soils is not consistent with the classical laws of the soil mechanics. It has long been established that for such soils, changes in suction do not have the same effect as changes in the applied stresses, and consequently the effective stress principie is not applicable. The aim of this dissertation is to study the behaviour of a Compacted Clay Fill, as a partly saturated soil, using the compaction and dissipation tests. With this purpose severa] samples ofKSS (Kaolin Silt & Sand) prepared in the laboratory. On one side, in the dissipation apparatus sorne samples are tested subjected to different loading and unloading stages with drained and undrained boundary conditions, considering the effects of different clod sizes, the moisture content and effort applied on tbe compaction of the samples. And on the other side, in the compaction tests the effect of the clod size and the degree of saturation on the Proctor compaction curves is assessed considering a selection of soil mixtures with different water contents and two equilibration times.
SubjectsSoil mechanics, Artificial soils, Mecànica dels sòls
URIhttp://hdl.handle.net/2099.1/13998
Collections
Share: