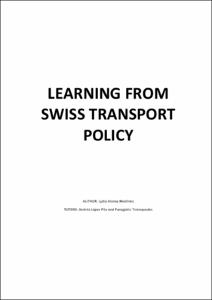 Anglès: The transport policy is the source from which emanate the actions carried out in a society in terms of mobility and, consequently, a good approach is a fundamental starting point for planning a transport service. In the case of passengers’ section in railways, Switzerland (along with Japan) is the global benchmark, for its long career and contrasted success. Proof of this fact were the mobility statistics in 2000, when the Helvetic society made an average of 2,000 Km per person and year by rail, a figure certainly high compared with the values registered in countries like Spain 510 km/ year-person), France (1,149 km/year-person), Germany (910 km/year-person) or U.S.A (32 km/year-person). Undoubtedly, this great success is attributable to its in transport policy's measures, so, over the following pages it is intended to make an accurate description of them also extracting its essential conceptual points whose application is interesting for every society paradigm. Talking about the recent history of Swiss railway passenger's policy is like speaking of RAIL2000, the most ambitious rail passenger transport project carried out in this country (serve as data the restructuration of 90% of its supply). The basic element around which was articulated the project was the implementation of a national clock-face schedule, and project's methodology, assuming the highest level of efficiency and excellence in every factor that influence in transport services' supply: infrastructure, rolling stock, spatial coverage (connections), time coverage (regular interval timetable) and reliability. In this sense, it is not surprising that the main slogan of the project was “plus rapide, plus eficace, plus direct et plus comfortable” (faster, more efficient, more direct and more comfortable). Its implementation was a resounding success: a 30% growth in demand for rail transport. Overall, RAIL2000 is part of a wide range of projects (RAIL 2000 + BUS2000, ZEB, NLFA, Rail 2030, ...) that aim at providing the public transport of the necessary weapons to being able to fight with the private road transport in modal split's battle. In parallel to the renewal of RAIL2000's supply, the Confederacy presented a set of important measures concerning the mobility demand of the Helvetic Society: intermodal competition policy. These measures focus primarily on strict legislation on land use as well as, the internalization of externalities (such as fuel taxes or "road pricing"). The joint application of both elements is the factor that gives the project a more singular effect. As interesting as the actions carried out in recent decades in terms of supply's and demand's particular approach are other three key factors of Swiss politics, such as planning a service instead of an infrastructure, the social commitment with the environment, and a strong reliability. The addition of these five points is the set of policy lessons that can be learnt from the Swiss passenger transport's policy. All of them have been tested and extended with the impressions of two of the greatest personalities in Swiss railways' milieu, Professor Ulrich Weidmann (Professor at the ETHZ) and Michel Béguelin (reputed politician and Confederation spokesman in the European Transport's Commission). On the other hand, the document also contains interviews with distinguished Keir Fitch (Deputy Head of the ETC) and Iñaki Barron (Director of the passenger section of the International Union of Railways), who offer the particular perspective of two most important institutions in the field of rail transportation policy in EU. Finally, lessons learned are implemented in the case of Catalan railway's medium distances. Thus, the report mentions some interesting suggestions for Catalonia, following the guidelines of the lessons learned and taking into account the current economic situation. These proposals consider implementing a new clock-face regional intermodal schedule, being focused on improving in connections in Maçanet-Massanes' station and El Prat de Llobregat's hub.
Subjectstransportation, Transportation buildings, infraestructures de transports, Transport
URIhttp://hdl.handle.net/2099.1/13979