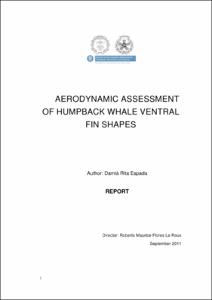 The ventral fins of the humpback whale (Megaptera novaeangliae) include a bulbous leading edge acting as a natural high-lift device. It has been suggested that application of this concept to wing design may yield advantages over traditional shapes (Miklosovic, et al., 2004). During the course of this project, the aerodynamic performance of whale fin models will be compared with conventional wing shapes. Based on the results of the study new wing design paradigms will be developed to improve the performance of flight vehicles operating under similar Reynolds numbers. Namely, the UAV developed by CATUAV, Furos (see Annex A - Furos Datasheet), will be used as reference aircraft. In order to implement this new leading edge shape, a light and self-operated device will be proposed. It consists of a membrane attached to the leading edge in such a way that it inflates at high angles of attack reproducing the whale’s bulbous shape. Finally, a design tool will be presented to calculate the shape of the inflated membrane by numerical means.
SubjectsAirplanes--Wings--Design and construction, Avions -- Ales -- Disseny, Aerodinàmica
URIhttp://hdl.handle.net/2099.1/13814