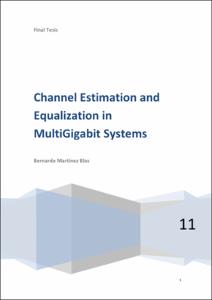 Document typeBachelor thesis
Rights accessOpen Access
Abstract
In actual mobile radio systems, multipath conditions pose a problem, as the channel becomes frequency dependent. This point is especially critical in case of high frequency transmissions with very high data rate and high error performance, such as defined in the IEEE 802.15.3c which is an emerging 60-GHz standard supporting data rates of multi-giga bits per second (multi-Gbps) for short-range indoor applications. The deployment of such high speed wireless transmission has been very difficult throughout history mainly by two critical factors: the first one was the lack of wide enough spectrum and the second one is the high cost of high frequency circuits and devices. However, this trend is changing to the point that not too long ago, the substantial unlicensed spectrum became available at the millimeter-wave band of 60-GHz. Also, the advancement in technology drives the cost of 60-GHz circuits and devices much lower than in the past making possible its use for high definition audio and video wireless transmissions. In order to overcome the transmission channel issues, it is necessary to include a channel equalizer in the receiver, which must estimate the channel impulse response and make some operations to transform the frequency dependent channel to a flat channel. Nevertheless, the equalizer technology will depend on three different factors: first one the physical layer (PHY) technique under consideration for multi-Gbps Wireless Personal Area Network (WPAN) which basically could be orthogonal frequency division multiplexing (OFDM) or single-carrier frequency domain equalization (SC-FDE); second, the channel impulse response estimation carried out in order to determine the channel transfer function H(f), existing several methods to obtain an estimation; and third, the used equalization method and structure in order to reverse all distortions produced by the channel. This Master thesis has been carry out during an Erasmus program in the Technische Universitat of Braunchweig, Germany, and it is the first part of a whole European project for the study, analysis and deployment of the IEEE 802.15.3c standard for wireless communications with very high data rate and high error performance in the 60-GHz band. According to the instructions and requirements defined by professor Thomas Kürner which was in charge of this project, this thesis include: first, a theoretical study of all the different propagation effects which could affect a wireless communication channel in order to run not only the simulations presented in this thesis but also the future simulations; second, the development of a model in Matlab/Simulink that will be useful to carry out all the project simulations (taken into account the specifications collected in IEEE 802.15.3c standard); third, the results of the carried simulations for Single Carrier Channel estimation and equalization by using two different equalization methods in the frequency domain: Zero Forcing and Minimum Mean Square Error equalization. Taking this into account, the thesis is organized as follows. Section I is dedicated to the study of all the different propagation effects and problems which affects a wireless communication transmissions; In Section II, technologies and Physical Layer Modes are described attending the IEEE 802.15.3c in order to learn its different characteristics for the subsequent channel estimation; Section III is devoted to channel estimation and equalization methods description; estimation and equalization methods are selected in order to carry out the simulations in Section IV; finally, in Section V the developed system simulator as well as the obtained simulation results are presented after implementation of Zero Forcing and Minimum Mean Square Error equalization methods in Matlab/Simulink.
SubjectsMobile communication systems, Equalizers (Electronics), Comunicacions mòbils, Sistemes de, Equalitzadors
URIhttp://hdl.handle.net/2099.1/13804
Collections
Share: