Indoor and outdoor rover with Simultaneous Localization And Mapping (SLAM) 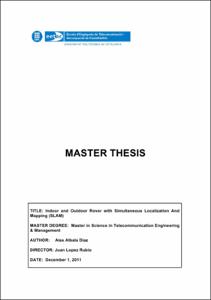 Document typeMaster thesis
Rights accessOpen Access
Abstract
This work describes the design, development and implementation of a SLAM (Simultaneous Localization And Mapping) consists of two subsystems: low-cost autonomous robot and a ground station where telemetry data and information of the robot are displayed. The goal of a SLAM algorithm is to leave the robot in an unknown environment identify the environment through sensors and extract a map. The self-location of the robot is important in order to locate properly in the space all the sensor data. So the main objective of this project is to develop a low cost SLAM. In this work it will be used hardware for fast prototyping for the proof of concept and so can use it in future teaching. It compares different SLAM algorithms and choosing the most suitable for this system. The chosen algorithm is studied in depth and implemented in the system. Also it is studied one of the common errors in all the terrestrial robots localization: the odometry errors. It is studied these errors and the needed corrections. Then it is studied the hardware components for the construction of an autonomous robot. All parts are analysed individually and it is explained what task realizes each element. Then also is explained the design of the software (both the robot and the ground station) as well as its implementation and functionalities. The software is separated into small pieces to make it more modular and this document explains each of these parts and their functions. Finally, it is shown the results obtained after the development of the system. It has designed a series of tests and analysed the results of each one.
SubjectsMobile robots, Robots --Control systems, Artificial satellites in telecommunication, Satèl·lits artificials -- Aparells i instruments, Robots mòbils, Robots -- Sistemes de control
URIhttp://hdl.handle.net/2099.1/13765
Collections
Share: