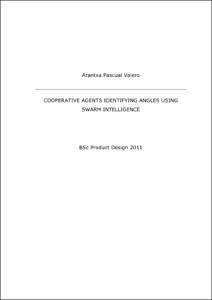 Show full item record
Pascual Valero, Arantxa
CovenanteeNottingham Trent University. School of Architecture, Design and the Built Environment
Document typeMaster thesis (pre-Bologna period)
Rights accessOpen Access
Abstract
Intelligence; said of the human being’s capacity to process information from the environment, as well as collect it from the outside. Until some time ago, as it can be seen from the definition above, it was thought that intelligence was something that belonged exclusively to the human being as it was believed that intelligence was something that depended on the internal structures of the brain and its interaction with the outside world. Now, the way to interpret this concept is quite wide. Thanks to various studies conducted by various branches of science has established the definition of intelligence as the ability to relate acquired knowledge to solve a specific situation and/or problem. Thus, a human being can be as smart as a rational agent non-alive. This definition, though, is still incomplete because it implies that intelligence is unitary, but can an agent be “dumb” by itself but be intelligent in an upper hierarchical level? Could it be that an agent owns intelligence in a group environment? The answer is yes and it is called swarm intelligence. Thanks to this type of intelligence, this project deals with the problem where several independent agents collaborate together to identify a wide variety of angles. Thus this project describes the analysis and design of the algorithm, by means of swarm intelligence, identifies the angular relationship of a geometric shape.
Description
Projecte del programa Erasmus elaborat a Nottingham Trent University
SubjectsDistributed artificial intelligence, Intel·ligència artificial distribuïda
URIhttp://hdl.handle.net/2099.1/13735
Collections
Share: