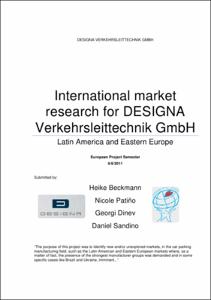 Show full item record
Patiño Calle, Nicole
Beckmann, Heike
Dinev, Georgi
Sandino, Daniel
CovenanteeDESIGNA Verkehrsleittechnik; Fachhochschule Kiel
Document typeMaster thesis (pre-Bologna period)
Rights accessOpen Access
Abstract
The purpose of this project was to identify new and/or unexplored markets, in the car parking manufacturing field, such as the Latin American and Eastern European markets where, as a matter of fact, the presence of the strongest manufacturer groups was demanded and in some specific cases like Brazil and Ukraine, imminent. To achieve this task, a literature and online research of indicators, like number of cars per thousand inhabitants and the GDP for those particular countries (among others), was carried out with the purpose of creating a portfolio that, by the aid of academic business tools like the McKinsey matrix, facilitates the decision of entry strategies for those particular cultural niches. Additionally, a questionnaire supported by an online survey tool was written in four different languages to create a picture of the current state of the market according to major actors in the business; the possible future commercial partners. The result of research shows that, between the studied countries and due to the fact that it is the one with the biggest market size and also because it will host the next Football’s World Cup in 2014, Brazil is the most attractive market and the place where, in a short term period, companies like DESIGNA should look. Finally, this study will allow car parking manufacturers and more particularly DESIGNA GmbH to orientate the efforts in a wise way, not only to generate market strategies for Sao Paulo and Rio de Janeiro but also to study possible roads to proceed or to avoid different latitudes.
Description
PFC del programa Erasmus EPS elaborat a Fachhochschule KielTreball desenvolupat dins el marc del programa 'European Project Semester'.
SubjectsElectronic commerce, Comerç electrònic
URIhttp://hdl.handle.net/2099.1/13607
Collections
Share: