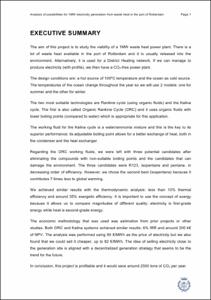 Except where otherwise noted, content on this work is licensed under a Creative Commons license : Attribution-NonCommercial-NoDerivs 3.0 Spain
Abstract
The aim of this project is to study the viability of a 1MW waste heat power plant. There is a lot of waste heat available in the port of Rotterdam and it is usually released into the environment. Alternatively, it is used for a District Heating network. If we can manage to produce electricity (with profits), we then have a CO2-free power plant. The design conditions are: a hot source of 100ºC temperature and the ocean as cold source. The temperatures of the ocean change throughout the year so we will use 2 models: one for summer and the other for winter. The two most suitable technologies are Rankine cycle (using organic fluids) and the Kalina cycle. The first is also called Organic Rankine Cycle (ORC) and it uses organic fluids with lower boiling points (compared to water) which is appropriate for this application. The working fluid for the Kalina cycle is a water/ammonia mixture and this is the key to its superior performance: its adjustable boiling point allows for a better exchange of heat, both in the condenser and the heat exchanger. Regarding the ORC working fluids, we were left with three potential candidates after eliminating the compounds with non-suitable boiling points and the candidates that can damage the environment. The three candidates were R123, isopentane and pentane, in decreasing order of efficiency. However, we chose the second best (isopentane) because it contributes 7 times less to global warming. We achieved similar results with the thermodynamic analysis: less than 10% thermal efficiency and around 35% exergetic efficiency. It is important to use the concept of exergy because it allows us to compare magnitudes of different quality: electricity is first-grade energy while heat is second-grade energy. The economic methodology that was used was estimation from prior projects or other studies. Both ORC and Kalina systems achieved similar results: 6% IRR and around 200 k€ of NPV. The analysis was performed using 85 €/MWh as the price of electricity but we also found that we could sell it cheaper, up to 82 €/MWh. The idea of selling electricity close to the generation site is aligned with a decentralized generation strategy that seems to be the trend for the future. In conclusion, this project is profitable and it would save around 2500 tons of CO2 per year.
SubjectsFactory and trade waste -- Purificatio, Feasibility studies, Biomass energy, Biomass – Combustion, Residus industrials -- Depuració, Estudis de viabilitat, Energia de la biomassa, Biomassa -- Combustió
ProvenanceAquest document conté originàriament altre material i/o programari no inclòs en aquest lloc web
DegreeENGINYERIA INDUSTRIAL (Pla 1994)
Location
1: Rotterdam, Stadhuis, 3012 Rotterdam, Països Baixos
URIhttp://hdl.handle.net/2099.1/13459
Collections
Share: