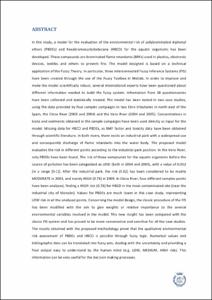 Document typeMaster thesis (pre-Bologna period)
Rights accessOpen Access
Abstract
In this study, a model for the evaluation of the environmental risk of polybrominated diphenyl ethers (PBDEs) and hexabromocyclododecane (HBCD) for the aquatic organisms has been developed. These compounds are brominated flame retardants (BRFs) used in plastics, electronic devices, textiles and others to prevent fire. The model designed is based on a technical application of the Fuzzy Theory. In particular, three interconnected Fuzzy Inference Systems (FIS) have been created through the use of the Fuzzy Toolbox in Matlab. In order to improve and make the model scientifically robust, several international experts have been questioned about different information needed to build the fuzzy system. Information from 38 questionnaires have been collected and statistically treated. The model has been tested in two case studies, using the data provided by four samples campaigns in two Ebro tributaries in north east of the Spain, the Cinca River (2002 and 2004) and the Vero River (2004 and 2005). Concentrations in biota and sediments obtained in the sample campaigns have been used directly as input for the model. Missing data for HBCD and PBDEs, as BMF factor and toxicity data have been obtained through scientific literature. In both rivers, there exists an industrial park with a widespread use and consequently discharge of flame retardants into the water body. The proposed model evaluates the risk in different points according to the industrial park position. In the Vero River, only PBDEs have been found. The risk of these compounds for the aquatic organisms before the source of pollution has been categorized as LOW (both in 2004 and 2005), with a value of 0.352 (in a range [0-1]). After the industrial park, the risk (0.62) has been considered to be mainly MODERATE in 2004, and mainly HIGH (0.78) in 2005. In Cinca River, four different samples points have been analysed, finding a HIGH risk (0.78) for HBCD in the most contaminated site (near the industrial city of Monzón). Values for PBDEs are much lower in this case study, representing LOW risk in all the analysed points. Concerning the model design, the classic procedure of the FIS has been modified with the aim to give weights or relative importance to the several environmental variables involved in the model. This new insight has been compared with the classic FIS system and has proved to be more conservative and sensitive for all the case studies. The results obtained with the proposed methodology prove that the qualitative environmental risk assessment of PBDEs and HBCD is possible through fuzzy logic. Numerical values and bibliographic data can be translated into fuzzy sets, dealing with the uncertainty and providing a final output easy to understand by the human mind (e.g. LOW, MEDIUM, HIGH risk). This information can be very useful for the decision making processes.
SubjectsEnvironmental risk assessment, Aquatic ecology, Environmental chemistry, Fuzzy logic, Medi ambient -- Avaluació del risc, Ecologia aquàtica, Química ambiental, Lògica difusa, Ebre (Conca hidrogràfica)
DegreeMOBILITAT INCOMING
Location
1: 22423 Estadilla, Huesca, Espanya
2: Castillazuelo, 22313, Huesca, Espanya
URIhttp://hdl.handle.net/2099.1/13213
Collections
Share: